REVIEW: Tomorrow, When the War Began by John Marsden 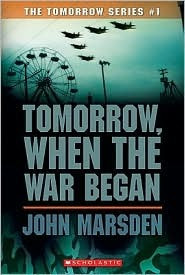 It feels like as I'm writing every single review for Dystopian August, I've begun with 'I've had this book on my shelves for ages unread' and it is no difference with Tomorrow, When the War Began by John Marsden. I had heard good things about the series on other book blogs I read, especially from Australian book bloggers, and was keen to start. In a stroke of fabulous luck, I managed to find the entire Tomorrow series in a local charity shop last year. However, the idea of beginning such a lengthy series kind of put me off, especially reading one that had been out a fair few years.

When the movie came out and the first book was repackaged with a movie tie-in cover, it did pique my interest again in reading the series but I still put off until very recently. I can't quite recall why. Now that I've read the first book, I'm both excited to continue the series as well as watch the film version!

Tomorrow, When the War Began is certainly not the book I expected it to be. In some ways it feels very much like the first book in the series with much of the novel exploring the cast of characters and setting the scene. But there is still quite a bit of action and some romance along the way.

Our narrator is Ellie, a teenage girl in Australia who organises this trip with her friends to go camping in the bush. They hike along to an area they call Hell, in which they've heard rumours of a man who holed up out there after being accused of murder. The beginning is very much a party atmosphere as these teenagers hang out and relax and goof about together. But when the week is over, they find that their town a very different place to when they left. Their families and their neighbours have all been taken hostage and their country invaded. This group of teenagers must make some really difficult choices, either to leave and remain safe or to find other ways in which to fight back against the town's captors.

The story is told after some of the events had already occurred and is written down by Ellie as she remembers it, so a lot of the plot is skewed in her favour. I found a lot of the character development to be interesting, seeing how some like Ellie and Milo adapted easily to a more survival mentality and how they became leaders in organising the others with supplies and means of safety. Reading of some of the more risky adventures of this gang of kids is quite exciting and following that, reading of the discomfort of killing another person or the difficulties to adjusting to these new circumstances is quite interesting.

I felt like the romantic element of the story a little hard to believe, especially as there is no build-up to it. Ellie just all of a sudden springs these statements upon us 'I started to have feelings for this person' and before we're able to adjust to THAT, she comes up with 'but now I also have feelings for this other person' OH. What? Thankfully the love interest isn't the main focus of the story and it isn't what propelled me to continue reading. Though of course, the problems and shifts in relationships will, I'm sure, will continue throughout the rest of the series.

This first book gave me enough information about the characters and the Australian invasion to keep me interested and curious about how events will play out during the rest of the series. Its popularity in Australia gives me hope that the rest of the books in the series will continue to build on the strengths of this first novel. I'm sure it won't take me as long to pick up the second book as it did to pick up this book!
Written by Michelle Fluttering Butterflies at 08:57