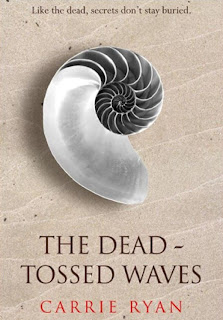 I read Carrie Ryan's The Forest of Hands and Teeth last year and really loved it. So much so that I immediately picked up this hardback copy of The Dead-Tossed Waves. Unfortunately, it set on my shelf for far longer than it should have. I think what intimidated me about this book is that it isn't a straight sequel to the previous book. As a 'companion' novel, The Dead-Tossed Waves is told from an entirely new perspective and I worried that it would take me awhile to sink into a new point of view, when all I really wanted was to know what happened to Mary after she made it to the ocean.

I really shouldn't have worried. Once I began, I found Gabry's story to be just as interesting and easy to follow as I did Mary's in The Forest of Hands and Teeth. Gabry has lived her entire life in this village by the ocean, living in the lighthouse with her mother and being afraid of the Mudo that surround her, that wash up from the ocean.

But despite Gabry's fear, when her friends decide to climb the village barriers one night in a celebratory rebellion, Gabry is convinced to go along with them. That night ends in huge tragedy as half the group are killed and turned by Mudo and the other half are caught by the authorities and punished. Following the orders of Catcher, her best friend's brother and her long-term crush, Gabry manages to escape and feels endlessly guilty and ashamed that her own fear made her abandon her friends and run for safety. And this guilt and shame propels Gabry to take further risks for her own safety to follow a friend into the forest even though she knows he's been infected by the Mudo.

There are many things I love about Carrie Ryan - I love the beautiful way in which she writes. I love how sweet and romantic her relationships are. But what I especially love about Carrie Ryan is that even though she writes about zombies, there is so much more about humanity in her books. The Dead-Tossed Waves is a really wonderful and emotional book about growing up and making hard choices and confronting your fears and who you are and what you want.

Right from the very first page, my heart went out to Gabry, especially in the difficult situations she finds herself in. I love her struggles with her own identity as well as this difficult love triangle she finds herself in - choosing between her childhood crush and a mysterious stranger. This book is so highly readable and exciting and heart-wrenching that I must urge you all to read both The Forest of Hands and Teeth and then this book. And now excuse me while I go hunting frantically for a copy of the third and final book in the series, The Dark and Hollow Places.