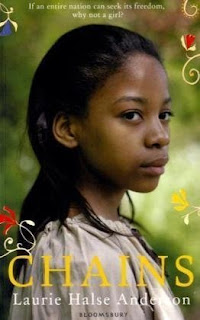 Reviewed by Kulsuma from Sunshine and Stardust

Before I read Chains by Laurie Halse Anderson, I was unsure of whether it would catch my interest as I thought it would be a grim, depressing book filled with nothing but battles. However, I was soon proved wrong. Once I started to read the book, I found it extremely captivating and I immediately began to feel Isabel’s every emotion and understand everything about her.

After their owner dies, Isabel believes she and her sister Ruth will be free, as promised in her owner’s will. However, Isabel is horrified to learn that she and Ruth will be sold. Her and Ruth’s cruel new owners, the Locktons, live in New York and it is there that Isabel is brought to the forefront of the American War of Independence.

The story is told well from Isabel’s perspective. Isabel is in a world where she has very little power over her own destiny. She tries to exert some control over her life by making deals with people, but she is consistently let down. She has no power to protect herself but she must also try and protect her ‘simple-minded’, epileptic sister, Ruth, who she loves very much. Even though Isabel faced immense pressure and suffered things that would have made many other people give up, she managed to persevere and dared to hope. Her need to protect Ruth spurred her on throughout the book and made her rebel.

Isabel’s life was fraught with bad luck. She had several chances of having a better life than she had with the odious Locktons; however, she was stopped at every turn. Chains was gruelling at times as Isabel was a slave; a non-person. I was with her as she had to go through unendurable physical and emotional torment. It was agony to watch Isabel fighting with herself to remain passive when both she and I as a reader wanted her to do something definite and aggressive towards her oppressors.

Chains was well-paced and in proportion, however, I thought that the ending could have been improved as I was expecting another chapter to round off this part of her story. As Chains was from Isabel’s point of view, the book contained colloquialisms. This was great as it was more realistic and it felt like I was hearing her thoughts as they occurred to her. Sad as it is to say, I felt that it would have been more likely that Isabel would have met a greater number of cruel individuals and fewer kind-hearted people such as Lady Seymour.

Isabel’s story was made more real for me by the presence of the other storylines such as the American War of Independence that was historically accurate. It was very worthwhile reading Chains as it gave some insight into the life of a slave during a momentous time.

I recommend Chains to people who are interested in historical fiction, slavery and the American War of Independence. If you like Chains, you may also be interested in reading a non-fiction book, the Narrative of the Life of Frederick Douglass, An American Slave Written By Himself which was also very interesting. This was the first in a trilogy and I am eager to read the next book, Forged.

Thank you so much for that fascinating review, Kulsuma!
Written by Michelle Fluttering Butterflies at 09:02