REVIEW: After Obsession by Carrie Jones and Steven E. Wedel 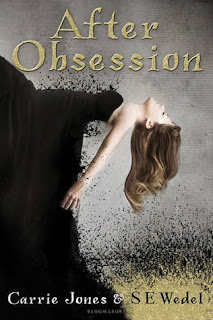 I wasn't quite sure what to make of After Obsession by Carrie Jones and Steven E. Wedel when it first arrived. I'd read the first book in the Need series by Carrie Jones earlier in the year and while I liked the story, it didn't blow me away and I haven't yet gotten around to reading the sequels to that series.

For me, After Obsession is much along the same lines. It was a very quick read, and I did enjoy the story. It was quite creepy in parts and I especially loved that one of the main characters is mixed-race, as that's not something I see very often in YA literature, and when I finished the book I did have a feeling of contentment. Perhaps it isn't fair, but I was hoping for more of an emotional reaction.

After Obsession is told in alternating chapters from two main perspectives. Aimee is a teenage girl, who still seems to be recovering from the death of her mother years earlier. Her mother had been labelled as mentally ill and Aimee tries her best to fit in and behave normally so that she doesn't stick out as her mother did. She has a normal boyfriend and best friend - but she isn't quite normal herself. Aimee can sense things others cannot and she's afraid of what that might mean.

Whereas Alan is a bit more accepting of his unusual abilities. He prides himself on his spirit guide and the Native American roots that he gets from a father he's never known. Alan and his mother move away from their home in Oklahoma after Alan's uncle goes missing and is fear drowned.

It's really Courtney, Aimee's best friend and Alan's cousin, who is in trouble in this story. She cannot face the fact that her father is gone forever, and in a desperate attempt to get him back, has brought demonic activity to this sleepy little town. Soon, strange things are happening and people everywhere are acting strangely, more aggressively. With growing attraction between Aimee and Alan, they must ban together to figure out what's causing all of the unrest in town and fight this demon once and for all.

I found both Aimee and Alan to be quite interesting characters, and I'm always pleased in a dual-narrative such as this, that both points of view are distinguishable. And as I said earlier, I found certain aspects of the story to be really quite creepy. There's a bit of atmosphere to everything going on, and I don't think I'd want to go near the water for awhile. The creep factor seems quite subtle though, not really in your face at all, which I appreciated. It's the same for the romantic build-up.

The only thing I had an issue with is that this River Man who seems to be the presense behind all of the evil is described as both a ghost and a demon. The two words seemed interchangeable, but are they really? I have no idea. I probably would have liked to see more from the secondary characters and a better in-depth description of demonic possession, which is mentioned but only briefly.


Overall though, I flew through the book quite easily and it was a pretty good read.
Written by Michelle Fluttering Butterflies at 13:32