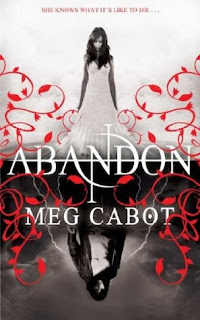 I am a huge Meg Cabot fan, I always have been. There's just something about Meg's stories and her characters and the way she writes which infuses both humour and emotion that gets to me every single time. So of course I have been very excited and interested to read Meg Cabot's latest offering, Abandon, the first in a planned trilogy. I was hoping to be swept away into a gripping tale of romance and intrigue and danger in this modern story that brings Hades and Persephone from Greek mythology to life.

Unfortunately, while I was gripped to the story and continued to fly through the pages and the chapters easily, the strange structure of the novel as well as how much of the book is story set-up made it somewhat difficult for me to love Abandon. I did enjoy it, particularly in the beginning when we're still being introduced to Pierce and this strange relationship she has with the mysterious John, but the rest of the story, while interesting, failed to connect emotionally.

I think the rest of the series will be better though, as there won't be as much groundwork to cover and more time can be spent with more of a plotline and some actual action. For much of Abandon, we're learning the backstory of three major events in our main character's life. We learn how Pierce died several years ago and because of the freezing weather conditions was able to be resuscitated and able to carry on with her life. But since that event, her life has changed in a really major way. Because during the time that Pierce died, she met John - this man who is hugely attractive and offers Pierce something quite strange and unusual.

Now Pierce is two years older and she's living on an island off the coast of Florida. There she meets John again and is better able to understand the offer that she was made and she struggles with her attraction to John and what it would mean to actually be with him.

While I didn't always love the structure of the novel, I did enjoy unravelling the mysteries of these life-changing events in Pierce's life. It was slightly confusing but always fun trying to work out what's happened with the little hints and details that Meg shares with us before we hear the truth of Pierce's actions and choices. I was always completely surprised and caught unaware. It's always great fun when that happens. I also quite fancy John Hayden as well! He's a very swoony bad boy and I love the tension-filled interactions between him and Pierce as all of each other's actions have been misunderstood. I'm really looking forward to returning to the mythology introduced in this series, I'm looking forward to returning to this relationship, to these characters and to the very atmospheric island of Isla Huesos.

Bring on the next book, please!