Review and Blog Tour: Kill All Enemies by Melvin Burgess 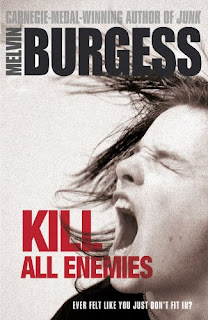 I was really excited to hear of this book. Kill All Enemies by Melvin Burgess is an absolutely wonderful and emotional book, one in which that I felt very strongly about before, during and now after reading it. I love that we are hearing a story about a group of children that are so often written-off or ignored or just not thought of highly in society. These three children - Billie, Chris and Rob - have difficult lives and problems and whilst a lot of people think of them as trouble-makers or bullies or as worthless and lazy, Melvin Burgess provides us with a different perspective. I really applaud his attempt to give these characters a voice, to show everyone a different side to the story.

There's so much about this book that strikes a chord with me. I could fully relate to the position that these teenagers are faced with and just as it did when I was a teenager, it makes me angry reliving it on behalf of these characters. While teenagers in general can be treated as second-class citizens, without any rights of their own, at the constant whim of adults and teachers who don't understand them or even hear them sometimes, it can be that much more difficult for teenagers like Billie, Rob and Chris.

These teenagers are struggling with educational difficulties, with difficult and unstable home lives, they are trying to get by with much more pressure and hardship than most other teenagers but are still confined by the frustrating school system and adults in general who turn a blind eye to their desperate cries for help because they can be masked by violence or trouble-making behaviours or even by a lack of interest.

Billie can be very violent and is constantly fighting and abusive, but that just masks her heart-breaking story of growing up too young. Of sacrificing her own life and her freedoms in order to take care of her little sister and to keep her home life stable when Billie's mother substance abuse gets in the way of being a mother to either of her children. Billie acts out in order to express her own feelings of anger and sadness and frustrations for the fact that so many people in her life have failed her. And both Rob and Chris hide their own secrets and troubles.

Luckily, they've all been excluded from their regular schools and have been sent to a special school for delinquents and trouble-makers and the careworker there are able to see beyond their attitudes and behavioural problems and get at the heart of these kids' problems. I cried more than once reading Kill All Enemies. I loved each of the three characters almost immediately and I felt like I understood them and I related to their feelings incredibly well. I think Melvin Burgess painted these characters so vividly and with great feeling and believable dialogue that any reader could relate. I think Kill All Enemies is a very powerful message, one that sends a positive message, one that I hope will provide hope as well as spreads more understanding and compassion.

We’re always hearing about how difficult it is getting boys to read, and how much they fall behind at school. The latest GCSE figures support the idea that boys are the weaker of the two sexes, academically. How come? Are they stupid? Surely not – they catch up well enough later on. Or is it just that they don’t want to do the work. Bad boys! That story about slugs and snails and puppy dog’s tails seems to be holding true.

Personally, I don’t think we should we should worry too much about the GCSE gap. Different people mature at different ages, and nature isn’t at all impressed by our instance on educating everyone to GCSE standard at the same age. Boys have plenty of time to catch up – it’s just a shame that we make it so hard for them by insisting that they start exams that may affect them so much in later life at an age when they should be out beating herbivores to death, or building earthworks, or lying in bed all day with dreams of empire. But like everyone else, I’d love boys to read more. So why is it so hard? And why does it seem to get harder as they get older?

Is it a physical thing, I wonder? Of course we all know teenage boys who want to lie in bed listening to music or reading books, but if anyone of that age is doing those things, it’s more likely to be a girl. Many boys are so physical at that age - football, sex, going out, hanging out. Sitting quietly down and doing something essentially studious doesn’t seem to appeal all that much.

Or is it the desperation of teenage boys to be cool – to be part of something fast and fun and quick - that makes them walk away from the bookshelf?

In the end, of course, if it is something in the nature of boys, we’re kinda stuck up a gum tree, aren’t we? But if there are things we can do, it seems to me that it has to be about the kind of books we produce for them. Boys like activities. They like games, they like TV, they like films. They like stories. If they don’t want to read the books we give them, surely the responsibility has to lie with us – publishers, writers, and of course teachers, librarians and parents. The answer is inescapable – we’re not doing our job very well.

What sort of things would boys read? When I was that age, I loved animal books and fantasy books. When I got later into my teens, I liked clever books. But then, I was a bookish kid and we can all write for bookish kids, for thoughtful kids. It’s the non-bookish ones who are a problem.

One advantage bookish kids have over non-bookish kids, is that they have access to their parents bookshelves. I read my books, but I read my mum and dad’s books as well and of course I came across good deal that was, officially, far too adult for my age. I should imagine many people have a similar experience. There was rude stuff, dodgy stuff, stuff about warfare, stuff about relationships. I soaked my way through a great deal of it. IN other words, like children at all ages, I had a range of stuff to get my hands on – stuff far too young for me, and stuff far too old …

If you come from a non-reading family, as soon as you hit, say, fourteen – maybe thirteen, you very often have a problem in that stuff for older people is in very short supply. The fact is, it’s still very difficult for writer’s of teen fiction to cater for older teenagers. Any author who writes a book for teenagers that has, say, some swearing in it, will be told at once that there are librarians who therefore won’t take your book. There’s a kind of equation here – the more “adult” material there is in your book, the fewer you are likely to sell.

I wonder …? I wouldn’t like to say that’s all there is to it, but I do think access to suitable material is still an issue. Gatekeepers – librarians, teachers and often parents as well, find young people’s tastes increasingly threatening, as they get older. A really exciting book for many boys of fourteen or fifteen might be dripping with blood, or sex, or danger – something addictive, dangerous, and thoroughly, delightfully unsuitable. If it’s not on his parent’s shelves, is it going to be in school? Sometimes the answer is yes, but often, it’s no. On the other hand, dodgy films are easy to find …

There is another side to this. I was talking recently to a teacher recently who took in some Anime books to teach to her class, and the kids were furious with her

“That’s ours. That’s what we do when we’re at home – it’s not for you to poach it,” they told her. The teacher respected the point and took the books away. You can see the kid’s point of view. Even the keenest readers can often remember books ruined by a critical reading, rather than a pleasurable one – they are really two different processes.

Perhaps boys won’t begin to read until we try to find a literature for them that has nothing to do with school. It’s a thought – and here’s a book to read while you think about it. Snakes and Earrings by Hitomi Kanehara. As it happens, it’s a book more for girls – I know, I know, it seems to go against everything that I’ve just written. But the fact is, I can’t think of a comparable book of this kind for boys.

Meanwhile, for writers who really want to get to grips with this group, I’d suggest really pulling the stops out, and write pure blue murder. Forget young adult – get it out in the adult bookshelves, and see what happens then. Someone’s going to do it soon enough, it might as well be you …
Written by Michelle Fluttering Butterflies at 09:14