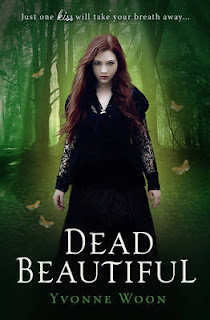 Isn't the cover of Dead Beautiful by Yvonne Woon gorgeous? Something about the green really grabs me. And butterflies! Did you know that I like butterflies?

I think for Dead Beautiful, I really tried to avoid reading any real in-depth reviews for this one. Every so often I love coming at a book without any previous knowledge of it and finding everything out on my own. It doesn't happen like that very often, but I'm so glad that I had a completely clean slate for this one. I had no idea what sort of paranormal creature I was dealing with beforehand within this story. Which is a very good thing because as the reader, we don't find out the big reveal until our main character, Renee, does around the halfway point. And around 500 pages, that's a lot of space to fill.

Despite it all, Dead Beautiful doesn't drag. At times, when reading, I did become aware that not a lot was happening to push the story forward, but I didn't care. The story is so infused with interesting information and little hints that play a larger part towards the end and I was fascinated. I loved the setting of Gottfriend Academy with it's insistence on maintaining old-fashioned ideals, I loved the inclusion of the study of Latin and philosophy, and the mystery that seems to incorporate a student's death and a kind of sinister local history.

We begin the story with our main character, Renee, as she inexplicably discovers her parent's dead bodies in the forest. With both parents' deaths ruled as heart failure, Renee's estranged grandfather becomes her legal guardian and despite Renee's protests and her questions and grief over the loss of both parents, he sends Renee off to Gottfried Academy.

Gottfried Academy is an unusual boarding school. There's a dress code and a strict rule against having romantic relationships amongst students. Academic importance is placed on strange subjects such as Latin and horticulture. As Renee tries to find her place in this new environment as well as deal with her loss, she becomes involved in this mystery of a recently dead student whose death shares some similarity with that of her parents'. She's determined to find out more, no matter how deadly or dark it becomes. At the same time, Renee can't help but be drawn to Dante, the hot but mysterious boy who clearly has some secrets of his own.

I did very much love the mystery of this book - not only of what paranormal activity was being explored but also who the murderer is and why. I thought the relationship between Renee and Dante was utterly sweet and tension-filled. The writing style really pulled me in and I read this rather chunky-sized book in no time because I just didn't want to let go.

I thought the ending was absolutely perfect! I did think it was a standalone novel (and I would have been more than happy with that!) but I've just seen that there will be a sequel in 2012. Very interesting, readable and well-constructed paranormal YA!
Written by Michelle Fluttering Butterflies at 08:23