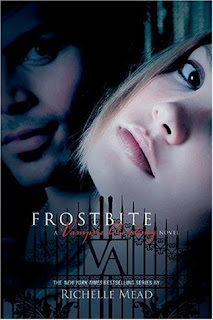 That's it. I'm officially a MAJOR FAN of the Vampire Academy series. After reading Frostbite, the second book in the series by Richelle Mead, I know that I will eagerly read every book in the series and I will be obsessive about it until I have each book and until I've read them all. I just can't get enough. And while I was initially put off with the differences between Moroi (mortal vampires), Strigoi (evil and immortal vampires) and dhampir (half human/half vampires who are usually charged with protecting Moroi as Guardians), in this book I was absolutely lapping up all of the descriptions and details of other Moroi and dhampir, desperate to know everything I could about this fantastic world that Richelle Mead has created.

I love how this book is filled with so much jealousy and heart ache, but also friendship and cool action sequences and a complicated mother-daughter relationship. It's a great second book in the series and I'm already desperate for more!

As I said, Frostbite is the second book in the Vampire Academy series which follows the reckless and attitudey dhampir Rose, as she navigates through her training at St. Vladimir's Acadmy in order to be a full-fledged Guardian for her best friend, Lissa (a Moroi) while also harbouring a massive crush on her mentor, Dimitri Belikov. Things are a bit strained between Rose and Dimitri after a lust spell was cast upon them towards the end of the previous book and they nearly had sex together. In order for them to remain as mentor and student, Rose must try to move on and forget how Dimitri makes her feel. It is a little hard for Rose to concentrate on moving on though when another woman shows up and apparently has this strong and close friendship with Dimitri.

Rose is overcome by jealousy but also has many other things contending with her time and attention. A massive Strigoi attack at the beginning of the book has set everyone at the Academy on edge and during the winter holidays have made it mandatory for all students to go and stay at this luxurious ski resort which will be heavily guarded in order to make sure the students are perfectly safe. One of the Guardians called in is, of course, Rose's well-respected Guardian mother. Rose has her own issues to deal with in respect to her mother. But she's also becoming more aware that her close friend, Mason has more than friendly feelings towards her.

And while the students should be perfectly safe at the ski resort, it is not to be! I do truly love the action sequences found in this book and the ending of Frostbite is really quite explosive. But I still find the characters and their relationships with each other to be the most fascinating. In Frostbite, everything is just taken to that next level as we learn more about the characters and their abilities as well as seeing new faces (Adrian!). I can't wait to read Shadow Kiss!
Written by Michelle Fluttering Butterflies at 09:31