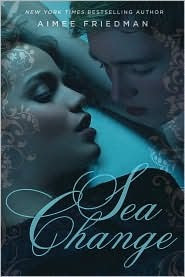 I wasn't quite sure what to make of Sea Change by Aimee Friedman before I started reading it. I hadn't heard very much about it and came to it with very little knowledge. It's fairly short and the way in which the paranormal and romantic aspects of the book play out leave me to wonder if perhaps this is the first book in a series? Though I haven't seen any information to support that idea.

Miranda is a 16 year old girl who is very science-orientated. She relishes the idea of spending the summer on the mysterious island that her mother grew up on sorting through the belongings of her grandmother who passed away and who left her house and things to Miranda's mother. Miranda also seems to be running away from some unknown drama that has left her without the support of her friends or her ex-boyfriend. Having very little experience in relationships, Miranda seems at a loss on Selkie Island when she's befriended by society-type girls who try to convince Miranda to have a summer fling. Instead, Miranda meets Leo, a handsome stranger she runs into on the beach who might just be more than he appears to be.

It's a strange book, this one. While on the one hand, I enjoyed the atmosphere of Sea Change and learning of the different stories and myths surrounding the island but I also wanted more. On the other hand, I didn't really believe the very different changes that occur to Miranda's mother once she's back in the company of the snobby rich women she grew up with. In some ways, it felt as though there were more to the story between Miranda and her mother, that perhaps history was repeating itself in terms of Miranda making the same choices and behaviours that her mother did in light of the upbringing that Miranda's mother had, but then that storyline petered out and I was left feeling a little confused. And while I did like Leo and Miranda as a couple, I felt like there wasn't enough page time for their relationship.

I liked Sea Change well enough, but it was both too short and the storyline not developed enough for it to go beyond that.
Written by Michelle Fluttering Butterflies at 08:11