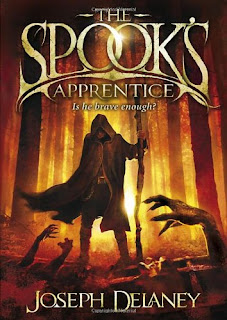 Oh, what a great book! I absolutely loved The Spook's Apprentice by Joseph Delaney - it's exciting and quite creepy and fast-paced and now that I've finished this book I'm utterly excited for the rest of the books in the series!

I was lucky enough last year to win the (at the time) entire series of books in the Wardstone Chronicles from another blogger but there's something about an entire series of books on a shelf that intimidates me. It was only when I was in the planning stages of this British month and realised all of the books I'd read at the time were contemporary/realistic that gave me the shove I needed to start this series. And I'm so glad that I did. It's aimed at a younger audience than my normal YA reads, but even so, Joseph Delaney really doesn't shy away from death or gruesome scenes. Our main character, 12 year old Tom Ward, faces some scary things in The Spook's Apprentice. I loved that about this book.

Tom Ward is the seventh son of the seventh son, and having no inheritance, he must leave his family farm and find an apprenticeship elsewhere. After using up all of the family's other connections already, the only option available to poor Tom is that of the Spook's Apprentice. The Spook is a pretty well-avoided person in most communities, but serves a valuable role. The Spook is the first line of defense when it comes to boggarts and witches and other evil creatures that could cause chaos and disruption. And so, with the added expectations of his magical mother, off Tom goes on a trial run with the Spook. And does he get into some trouble! The poor boy, even after being warned off of girls, soon meets Alice, and is convinced into doing her family's dirty work and makes huge, life-threatening mistake after another.

Tom makes mistake after terrible mistake and bad things do happen. But this book really shows off the strength and courage that Tom needs to move forward and learn from the bad decisions of the past and work towards better things. It's really fascinating to learn alongside Tom the different magic and lore of witches and boggarts and learning Latin and spells. It also shows the loneliness and the isolation that this job would incur, but it also shows the benefits to the people in the villages and communities. I'm particularly interested in learning more about Alice, a girl who straddles the divide between good and evil and also more about the secrets and mysteries of Tom's mother.

It's been a long time since I've been THIS excited about a series, especially a fantasy series aimed at a middle grade audience. But I'm absolutely hooked! Bring on the next book.
Written by Michelle Fluttering Butterflies at 08:22