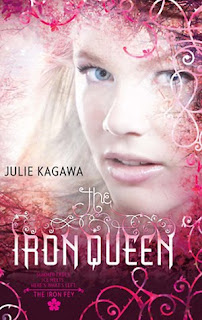 Oh I do adore the Iron Fey series by Julie Kagawa! And this, The Iron Queen, the third in the series is absolutely brilliant. I don't know how Julie Kagawa manages to consistently write books that will suck me in so utterly and have me care so completely about the world, the characters and the relationships.

Because it is the third book in the series it will be hard for me to review this book without spoiling some aspects of the two previous books, but I will not spoil anything within this book! I promise.

The Iron Queen begins roughly where The Iron Daughter finished. Meghan Chase and Prince Ash have both been banished from the faery world for admitting their love for each other and their refusal in face of the faery courts to give each other up. They think that it's all over and that they can lead normal lives from here on. But on their way back to Meghan's home and family, she fears her arrival will mean that her family will come to harm.

The False King of the Iron realm is after Meghan and the iron glamour she has recieved after killing Machina. The false king won't stop until he defeats Meghan and his attack on the lands of the Summer and Winter fey continue. Meghan and Ash must once again journey back and into a conflict so large and very nearly hopeless. But as Meghan and Ash begin to prepare themselves for war, they find they have some very surprising allies on their side. For once, Summer and Winter are joined to defeat the Iron fey, but they rely solely on Meghan, the only person able to withstand the Iron and get close enough to destroy the False King once and for all.

I adore the characters that Julie Kagawa has brought to us in this series. From self-sacrificing Meghan Chase, to cold and aloof Prince Ash. I adore Puck, with his goofy humour and his loyalty. And I can barely put into words how much I love Grimalkin. I didn't think it possible for me to care more about these characters then I already did, but the events of The Iron Queen really ramped up all of my feelings. I was heartbroken for Puck, I was desperate for Meghan and Ash to have happiness whilst being surrounded by the grimness of war and battle.

The battle sequences were breath-taking, as were the tender and at times painful moments between Meghan and Ash. This book was explosive and it makes me year for more!
Written by Michelle Fluttering Butterflies at 09:25