REVIEW: Words in the Dust by Trent Reedy 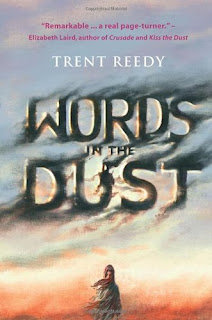 Guest review by Kulsuma of sunshine and stardust

Words in the Dust by Trent Reedy was a memorable, vivid and bittersweet book. It tells the story of a young Afghan girl called Zulaikha who has a cleft lip. Due to this deformity, she is cruelly bullied by the local boys who call her ‘Donkeyface’ and she is even verbally abused at one point by her brother which is heart-breaking in itself. All Zulaikha wants is to be normal like her sister, Zeynab and to one day get married. With her cleft lip, however, she knows this is impossible.

One day, Zulaikha meets her deceased mother’s old teacher, Meena, who introduces her to poetry and teaches her how to read and write. Though Zulaikha knows she will be in great trouble if her lessons with Meena were ever to be found out, Zulaikha perseveres.

At the same time, American soldiers enter the Afghan town, aiming to build the infrastructure of the area; however Zulaikha is warned to stay away from them. Even so, one of the soldiers sees her cleft lip and all that Zulaikha thought was impossible suddenly becomes possible.

With Zeynab’s marriage on the horizon, Zulaikha believes her life will improve infinitely after the surgery. But then things take a turn for the worse- surgery is out of her grasp and her sister’s fiancé isn’t at all what they’d expected. Zulaikha’s hopes for the future were gone as quickly as they had come.

Could things get any worse?

I really enjoyed reading Words in the Dust as Zulaikha was a likeable character. There were so many obstacles in her way; her cleft lip, the people around her such as her stepmother and to an extent, her culture. I wanted to reach inside the book and say to her ‘Keep going, don’t give up!’

Zeynab’s engagement and marriage is a focal point of Words in the Dust and it was fascinating to read about Afghan customs, such as looking at your intended partner in a mirror on the wedding day. The relationship between Zulaikha and Zeynab was integral to the book and I liked their bond of sisterly affection.

The other characters were believable and I think this is why I enjoyed Words in the Dust as much as I did. Some of the characters surprised me when I least expected them to. Though Zulaikha’s story and the issues along with it are complex, it is definitely worth reading.

The shocking and graphic turn in the story left me reeling, engraving the story into my mind. I won’t spoil it, but I will say it is tragic. Overall, the ending was bittersweet and I had mixed feelings; I don’t know whether I can be truly happy for the way Zulaikha’s life turns out due to the events leading up to the end of Words in the Dust. Words in the Dust tells us to make the most of our opportunities and to make every second count.

Thank you for that thoughtful review, Kulsuma!
Written by Michelle Fluttering Butterflies at 08:24