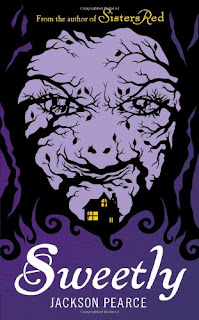 Earlier in the year, I read and loved Sisters Red, so I was always going to be hugely excited to read Sweetly by Jackson Pearce. I really love her retellings of popular fairy tales. She has a great eye for turning a story we're all familiar with and giving it a new twist and for seeing things in a new and different way. While I may have liked Sisters Red a little bit more than Sweetly because of the relationship between the sisters, I also found Sweetly to be very entertaining and interesting and I flew right through the pages, desperate to find out what happens.

Sweetly begins our our two main characters, Ansel and Gretchen, and an unnamed twin sister of Gretchen's exploring the woods. My attention was immediately grabbed by the addition of a third sibling in this story, one that disappears after a witch chases the three of them in these woods. The idea that this twin sister is unnamed and unspoken of, because of Ansel, Gretchen's and their parents' grief and also because of their guilt is an intriguing one.

Despite this being a retelling of Hansel and Gretel, we never hear of Ansel's point of view and this too, I find surprising, I was really expecting a dual-perspective. Instead, we get Gretchen's view of the world. It's many years after the death of her sister and Gretchen is plagued by the question 'why?' Why when the two girls were identical, did one sister live and the other did not? Gretchen has sort of fallen apart over the loss of her twin sister, and has relied on her older brother to be her rock, to be dependable and to always be there. So when she suggests they travel to the other side of the country to see the ocean, Ansel is there for her. But things don't go to plan, as their car breaks down in a small village and they have no money to carry on without it or to fix the car.

When Sophia, the local chocolatier, offers to let Ansel and Gretchen stay with her in exchange for some help around the house and with her chocolate stop, the two agree. Everything seems to be going right for them, as they've finally found a place where the two feel as though they belong and with somebody who really cares for them. Despite the nearness of the forest, which still terrifies Gretchen, she does her best to carry on and surmount her fears. It doesn't help that there are rumours floating around about Sophia and her annual chocolate festival. Girls in town disappear every year after attending Sophia's event, and fear and mistrust of Sophia lodges in Gretchen's heart. But Gretchen is determined to be different, to fight against her fears of the witch and of the forest and to survive.

While I thought the story and the retelling of this classic fairy tale was done well and in a way that was different and interesting, I didn't feel as though I connected emotionally as strongly as I wanted. I loved Gretchen's struggles with her fear of the forest and the way in which she begins to change her fear into something else, into a way to protect herself if the witch ever attacked again. I also thought the interactions between Gretchen and Samuel were fun. But I wanted to see more between the three main characters - Gretchen, Ansel and Sophia.