REVIEW: But I Love Him by Amanda Grace 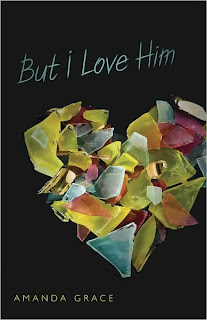 But I Love Him by Amanda Grace is a very powerful book. I was slightly nervous before reading it due to it's difficult subject matter, but I really loved the way in which Amanda Grace tells this story sympathetically in such a way to prevent early judgement and to garner some understanding around domestic violence.

I really love that But I Love Him is told in reverse chronological order, showcasing Ann and Connor's broken relationship frin it's painful and dangerous end to the very beginning when everything seems more optimistic and sweet. I read somewhere that Amanda Grace did this in order for readers to not stop at the first instance of violence or intimidation and say 'this. this is when Ann should have walked away' - instead, Grace shows us how much messier and complicated it is to be in this type of relationship. For there to be other factors involved and how that line that appears so clearly to other people, has become blurred and confused in Anna's position. She has given so much and so entirely to this relationship that it becomes increasingly hard to find the strength and courage to leave.

My heart really went out to Ann. She begins this relationship with Connor and she has such hope that things will work out. Everything is really intense and she feels like Connor is something special, somebody who really gets her. And as we glimpse some of these flashbacks and memories that Ann has about her relationship, we are show something very raw and honest and heartbreaking about how Ann has lost herself in small pieces over time. How she begins to give more and more to Connor, how her relationships with other friends and family erode over time, the isolation and powerlessness she feels.

I think the author did an amazing job showing this hurtful relationship in such a way that by the end, there is sympathy for Connor as a person. I like how his actions are never justified by what he went through, by his experiences, but that we at least can see they have shaped the person that he has become. And much the same with Ann - her choices and belief in Connor led her down a path that seemed inevitable, and also her struggles with staying and leaving.

This book was very difficult to read, it was so very sad and heartbreaking but also very beautiful in parts with Ann's very honest insights into losing herself to this broken relationship.

Written by Michelle Fluttering Butterflies at 08:26