REVIEW: Empress of the World by Sara Ryan 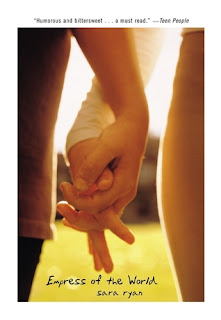 Empress of the World by Sara Ryan was a bit different that I expected it to be. It was an interesting story and I really enjoyed getting to know this brilliant cast of characters, but sometimes I felt let down a bit by the structure of the novel between narrative and diary entries.

Our main character, Nicola, has been sent to a summer camp for gifted youth. She's interested in becoming an archaeologist and has signed up for classes at the Institute. On her first day, she meets a group of people that quickly become friends throughout this eventful summer.

We have Katrina, this wonderfully outgoing computer nerd, Isaac, the nice guy with a huge crush on Katrina, and of course, there's Battle. Battle who is this beautiful girl who is smart and cool and slightly mysterious. Nic finds herself immediately attracted to Battle, which begins Nicola's questions about herself and her sexuality as she examines her feelings for Battle and the people around her.

I really liked Nicola as a character and narrator. I thought Battle and Katrina and Isaac were all believeable and realistic characters. I could definitely relate to the feelings of first love as being confusing and overwhelming. I especially loved this thing between Nic and Battle. It was very sweet and beautiful as Nic and Battle spent more time together and Nic realised how much she was attracted to Battle physically but also towards her as a person and her personality. I loved the beauty of how this this relationship builds up.

My only issue with this as a story, is sometimes Nicola's diary entries that she writes as a way of making sense of the world in an archaologist's way really breaks the flow of the narrative. Especially after a really sweet and tender moment between Nic and Battle - going between that and a journal entry felt jarring. The diary entries left me feeling distanced from the story and towards the end, after a big conflict, I couldn't quite find myself again inside these character's heads and hearts. Still, the first half of the book more than made up for the second and I'm very glad that I read this book!

Written by Michelle Fluttering Butterflies at 09:22