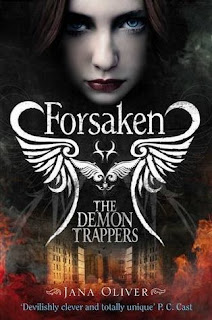 
Forsaken by Jana Oliver was an interesting and enjoyable book. It centres on seventeen year old Riley Blackthorne who desperately wants to follow in her father’s footsteps by becoming a demon trapper. But how can she prove herself in what is essentially a man’s world? When one of her assignment goes grievously wrong and a Grade Five demon (the worst kind) attacks her, Riley is summoned before the Trappers’ Guild. Things go from bad to worse when her father is killed.

The future world Oliver created felt authentic. It was urban, desolate and grim. The variety of creatures she introduced from demons to witches to angels was great as it enriched the story. There were detailed descriptions of the categories of demons.

However, I wished more time had been spent on developing other aspects of demon-trapping, for example the weapons they used, how they made them and what happened to them after they were caught. Furthermore, the witches and angels weren’t developed to a great depth.

What I was looking forward to the most was the action. There were some great action scenes in Forsaken which I really enjoyed, but the intervals between them felt too long. There were some great twists and turns in the story which were great. The climax was fantastic as it was action packed but unfortunately, it was rushed.

Riley was a great character. She was well-developed and I was emotionally connected to her. I felt her frustration at not being taken seriously by the Trappers’ Guild. I believed in the slight jealousy she had of her father’s demon trapping partner; Beck. I liked the tension between her and Beck, who she had a crush on a few years prior to the start of the story. At times, Riley got into bad situations which would have been avoidable if not for her own stubbornness.

I found Forsaken lacking at times. Oliver introduced so many potential love interests for Riley, that I was sure there was going to be a love-quadrangle. Furthermore, Riley’s eventual romantic relationship was rushed and thus I didn’t believe in it. Also, Oliver introduced too many characters and did not develop them.

Beck’s colloquial language takes time to get used to as well as his and Riley’s internal thoughts written in italics in contrast to the narrator’s voice. There were various other plotlines apart from the main one, which meant Forsaken went into tangents at times. I was left with some questions by the end. Hopefully, they will be answered in the next book.

Overall, while I did enjoy Forsaken by Jana Oliver, I am expecting more from the sequel, Forbidden.

Thank you for the interesting review Kulsuma!
Written by Michelle Fluttering Butterflies at 08:35