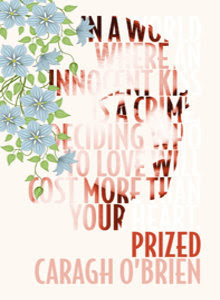 I found myself to be very surprised by Prized by Caragh O'Brien. It's the sequel to Birthmarked, which I read last year and really enjoyed. I think the reason I was surprised by Prized is that I assumed that because it is a sequel, the events that took place in the new book would remain in some way linked to the dystopian society that we encountered in Birthmarked. Not so.

In Prized, our main character, Gaia and her baby sister are rescused by the citizens of Sylum, this female-dominated dystopian society in which men hugely outnumber the women but are treated as inferior. Also? Kissing and general touching between sexes is prohibited.

I will admit that when I first read the synopsis of Prized, I wasn't quite sure about it. I wasn't fully ready to have the characters from Birthmarked, which was a story about science and midwifery and secret codes and DNA, and have them transplanted in this different type of world. But I gave it a chance, and I really enjoyed it.

I especially loved seeing the way in which Gaia developed as a character and seeing her in a different light. In Birthmarked, Gaia is treated very differently because of the burn scar on her face. Whereas in Prized, where the society has very different values and ways of thinking aside from physical appearance, Gaia, both as a woman and as a skilled midwife, is ... well, a prize.

It also has an interesting look at gender, about choices - particularly a women's right to choose abortion, and modesty and a kind of old-fashioned view of relatioonships and physical affection. I found myself thinking more about these things and redefining my stance on them as I was reading Prized, and I do love when a book allows me to do this.

Though Prized isn't quite as action-filled as Birthmarked, it does have an interesting array of new characters as well as familiar faces from the previous book. There is also another scientific mystery to solve and plenty of romantic angst for our Gaia. I'm very happy that I gave Prized a chance and I will definitely not be so reluctant to read the next book in the series! In fact, I'm pretty excited about it!
Written by Michelle Fluttering Butterflies at 08:46

Email ThisBlogThis!Share to TwitterShare to FacebookShare to Pinterest
Labels: Books, dystopian, reviews, simon and schuster, YA