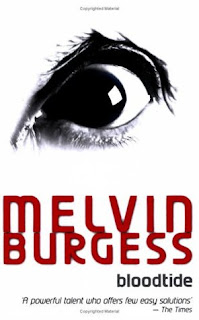 Bloodtide by Melvin Burgess bases its story on that of the Icelandic Volsunga Saga. Set in a London of the future that has been ravaged by gang warfare and abandoned to those seeking power, it focuses mainly on one of the warring families, the Volsons. The key characters are twins Signy and Siggy. At the beginning of the book their father Val is working on a treaty with Conor, the rival gang lord, hoping it will lead to them working together to leave London and take over the rest of the country. London has been walled off, and beyond the wall is the half-man lands, filled with creatures created in artificial wombs, mixtures of human, machine and animal. Val wants to destroy the half-men and move on through the land, and to rule it. But he needs Conor and a united London to do so.

Part of the treaty involves betrothing his daughter Signy to Conor and uniting the families. Signy is of course initially outraged by this, rightly saying that her brothers would never be expected to do something similar. She wants to be treated as their equal, she wants to fight, but her wants are dismissed. The wedding goes ahead and Signy has to leave the comforts of her home and her brother Siggy and travel to Conor’s territory. Things don’t quite go as Val planned and the Volsons’ power crumbles. Signy and Siggy are separated for many years as they both fight their own battles, one for power, one for freedom.

Interwoven amongst all this are the gods, specifically Odin and mentions of Loki. Odin steps in early on at a banquet, stabbing his knife into stone and saying whoever can remove it is its rightful owner. Everyone can sense the power of the knife, and Conor especially desires it, but it is not for him. The gods meddle every now and then, though I didn’t quite get the motivation for it, other than that, I assume, they are in the original stories, and it helped move the plot along.

I’m afraid I’d never heard of the Volsunga Saga or its characters so I couldn’t see what the author had used as his inspiration and where he’d taken more poetic licence. I’m aware of Odin and the knife/hammer (depending on whether you’re watching Thor or not), and Loki, but that’s about it, so I didn’t have much idea where it was going.

It’s hard to describe how I felt about this book. I didn’t enjoy it. It is brutal and hard to read at times, and it’s very difficult to like or really care about anyone in it. But I was definitely hooked by it and I wanted to keep reading to see what happened. I was continually shocked by the tone of it, and how explicit it is, with death and sex, given its intended audience. But I think that’s a good thing, at no point does it talk down to anyone or sugar coat anything. These people do bad things and have bad things done to them, they are selfish and vindictive and happily play with other people’s lives. I wasn’t that keen on the ending, it seemed to fade out rather than go with a bang, but the majority of the book was a gripping read. Having said that, I’m in no hurry to pick up the second book. I guess the easiest way to describe it is conflicted, which is better
than bored or unmoved.