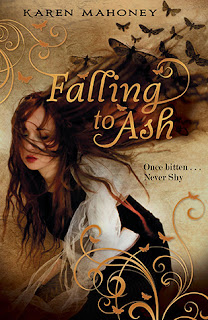 I've only read one book by Karen Mahoney before reading Falling to Ash, but I will definitely be picking up her other books, as I've enjoyed both books I've read by her very much.

I was really intrigued when I heard Karen Mahoney was writing another YA series alongside The Iron Witch series.  I was even more intrigued after seeing the gorgeous cover for Falling To Ash!  And while I am feeling a teensy bit weary of books involving vampires, I found Falling to Ash very readable and slightly addictive.

Moth is a teenager who recently dropped out of university and has had to try to separate herself from her friends and family ... because she's been turned into a vampire!  Things become even more complicated for Moth as dead bodies start appearing linking the dead to Moth.  Who is killing these teenagers that Moth used to know?  And why are they not staying dead?!

One thing that I enjoyed  a lot about the book is how Moth's story of how she was turned into a vampire by her Maker, Theo is told in bits throughout the main narrative which is focused on the mystery of local murders that seemed to be tied to Moth's previous life as a human.  I really desperately wanted to know more about this strange relationship between Theo and Moth and I really wanted to know what led up to Theo losing control and turning her.

Alongside these mysteries of murder and vampire-turnings, there are some really fascinating relationships in this book.  This is definitely what I loved most about the book.  First there's Moth and her relationship with her younger sister.  I love sisterly relationships, and you can tell how much Moth cares about her baby sister and while Moth knows that she should keep as much distance between her human family as possible, it's still really hard for her to turn her back completely on her family just yet.

There's also Moth and Theo which is just briefly touched on in this book and one that I hope is explored more in further books.  But what is briefly touched on is Moth's insecurity over Theo's behaviours and feelings.  This area of the story both creeped me out a little bit and also fascinated me.  I definitely want to know more.

Then there is a big one - the beginnings of a friendship between Moth and Jason Murdoch, the young vampire-hunter who is following in the footsteps of his vampire hunter father.  I really liked the very tenuous relationship at the start of the book as both Moth and Jason are wary of each other but know that they both need each other in order to get to the bottom of things.  I found myself also really caring about Jason and his difficult relationship with his father as well.

I found Falling to Ash a really great start to an interesting series.  There's a real strength here in characters and relationships and mystery.  I want to know more about this story and about Moth and Jason and Theo.  I'm excited!
Written by Michelle Fluttering Butterflies at 08:08