REVIEW: Eternally Yours by Cate Tiernan 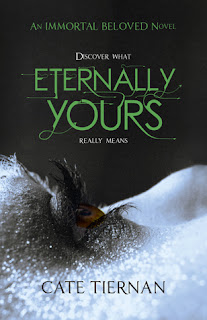 I do so love the Immortal Beloved series by Cate Tiernan, so I was absolutely ecstatic to read the third and final book in the trilogy, Eternally Yours.  It was so much fun to get back into Nastasya's head and reconnect with her and Reyn and River and the rest of these wonderfully flawed characters.  I raced through this book, despite it being over 400 pages long and I was always so disappointed any time something got in the way of me reading this book.

Nastasya really is one of my favourite characters.  She's an immortal and having lived for so many years she's lost touch with what it means to be human, she's avoided making real connections with other people and she has had such a negative view of herself.  What I really enjoyed in Eternally Yours is witnessing how far Nas has come during her time at River's Edge.  Alongside River and the other teachers and students at this rehab for immortals, and together with study, meditation and lots of hard work on a farm, Nas is finally at this stage where she's able to put herself back together into a fully-functioning person.  Plus, I just love her sense of humour.  I can't even count the number of times that I laughed out loud while reading Eternally Yours because of some funny thing that Nas has said.  I love her confusion and her panic at feelings things.  I love that she tries so hard.

I kind of love Reyn too.  Nas and Reyn are so perfect together.  They're both a bit rough around the edges and have clearly been through so much.  I love the connection and attraction that they have for each other and that we were able to learn a bit more about Reyn in this book.  While there wasn't quite as much tension and swooniness in this book as to previous books, there is still that great chemistry between these two characters.  There's also that chance that both of them can screw it up badly, so I was kind of on the edge of my seat where these two characters are concerned.

Eternally Yours didn't go quite as I imagined it.  I was expecting a return of some of the baddies from the previous two books, and while Incy did make an appearance in this book, it isn't in a way that I had considered before.  Even so, there's plenty of mystery surrounding a threat not only to River's Edge but to immortals everywhere that sends everyone into a panic.  I found myself not quite as interested this time around regarding the build-up of this threat, but that was okay and the explosive ending made my heart beat a little faster!

Eternally Yours was written in such an engaging way, with brilliant characters and development.  There's plenty of kissing and soul-searching and humour.   This was a really excellent book to round out an incredible series! Highly recommended.
Written by Michelle Fluttering Butterflies at 08:04