Today I am very happy to introduce both Ellie Phillips, the author of Scissors, Sisters and Manic Panics (sequel to Dads, Geeks and Blue-Haired Freaks) to the blog today along with Sadie Nathanson, the lovely star of the series to talk about summer hairstyles.  I have to admit, I quite fancy that two-strand braid.

But for now, I'll leave you in the capable hands of Ellie and Sadie, and if you'd like to know more about Scissors, Sisters and Manic Panics or about Ellie (and Sadie!) please do visit the following websites: 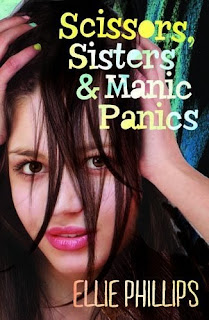 In my new book ‘Scissors, Sisters and Manic Panics’ the main character, Sadie Nathanson, is on a mission to win The Thames Gateway Junior Apprentice Hairdresser (or Barber) of the Year Competition.  So, as she’s the expert, I thought I’d get Sadie to talk us through what’s happening with Summer Hair 2013;

“Okay, just so you know; I am a total hair geek.  My cousin Billy is a geek fullstop; guitars, World of Warcraft – you name it he’s obsessed, so I reckon it’s something in the genes, right?

Anyway, being a hair geek the first thing I think when I see someone is ‘okay – what’s with the hair?’ And that can be anybody; Barack Obama, The Queen, that woman opposite me on the bus, nobody is exempt from my scrutiny so watch out….

If you’re a long-term hair geek like me then you’ll notice that ‘natural’ is a big contrast to that dead straight hair I was still doing last year – which personally I thought made some people look like drowned rats.

My stand-out favourite trends are these: 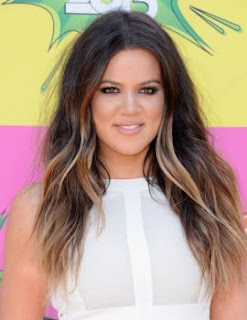 1. Khloe Kardashian’s ombre – the lighter tones at the end of her hair are natural and sun-kissed looking 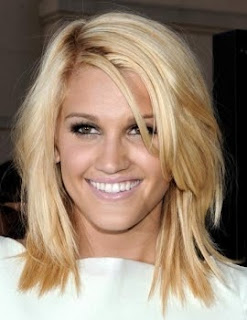 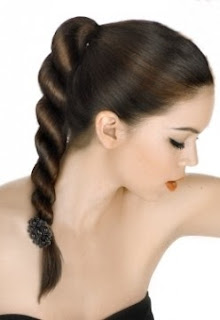 3. If you’ve got long hair (my Cleopatra bob’s almost grown out) then you might be on the look out for a new twist.  The trend that came up last year, and which is still around this summer, is literally a ‘new twist’; – the two strand braid.  With the ‘two-strand’ you twist both sections three times before wrapping the hair over and securing at the bottom. 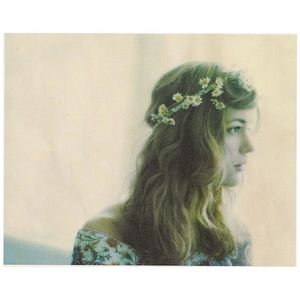 And, as it’s summer and ‘natural’ is in I’d say that flowers are definitely a must. I’ve done a heap of clients this last month going to festivals who’ve left the salon looking like a right bunch of hippies.

If you’re deciding on a whole new look then I can tell you some useful stuff about face shape, because, GOLDEN RULE; certain styles fit certain faces, dontcha know.

The client I worked on at Aunt Lilah’s salon last Saturday (yawn) had a triangular face!  Triangular!  THAT is a CRIME AGAINST HAIRDRESSERS.  You have to narrow the forehead and widen the chin – I did a side-swept fringe – total genius.

But what about other face-shapes;

Round faces need to be balanced out – so fringes help

Heart shaped faces (similar to triangular) but sweeter – a jaw length style compliments the cute pointy chin thing, and a fringe that’s cut longer at the sides is also a winner but I can’t tell you for why – I’ll have to check that out with Dariusz when he’s not scowling at me and flinging hairpins around.

Square faces can come across as a bit masculine – so if you don’t want to look like Arnie Schwarzenegger, get some layers quick!

And finally – the oval face – my total dream; you can more-or-less do anything.  The advice is “don’t cover up” – so no heavy fringes or brushed forward styles.  I should say, that as this last bit of advice is from Aunt Lilah who still cuts ‘The Rachel’ on half of her clients, you may want to ignore it completely!   Happy Summer Hair guys!”

Thanks for that Sadie and Ellie! Ellie has created a special hair quiz - Are you a sister of the scissors or a manic panicker? Check it out and let us know how you score!
Written by Michelle Fluttering Butterflies at 08:06