PTSD in The Killing Woods by Lucy Christopher (Blog Tour) 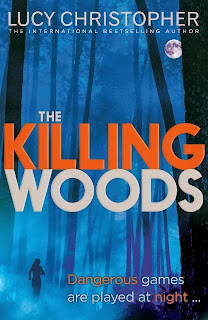 The topic for Lucy's guest post today has personal meaning to me. My father is a war veteran and I witnessed the effects of his PTSD throughout my childhood. I'm glad that PTSD is something that is being talked about and

If you'd like to know more about Lucy Christopher or The Killing Woods, please do visit the following websites:

PTSD in The Killing Woods
by Lucy Christopher

PTSD, or post traumatic stress disorder, is a medical condition that may develop after a person has experienced something traumatic. This could come in the form of a sexual assault, an injury, the witnessing of something horrific, or an experience that was life threatening.

In my novel, The Killing Woods, Emily’s father is suffering from PTSD as a result of the disturbing things he witnessed as a combat soldier.  During the novel Emily recounts how her father, Jon Shepherd, experienced some of the most common symptoms of this disorder: recurring flashbacks, a blanking out of the event itself, a retreat into himself and a high level of anxiety. Jon Shepherd spends more and more time in the abandoned World War Two bunker in the woods behind their house, drawing dark, twisted images of death and the woods on its walls in an attempt to work through the pain inside of him. Emily and her mother do not know how to help him return to the strong capable father he once was, and there has not been enough general support since Jon was dismissed from combat. When Jon Shepherd begins the narrative of The Killing Woods by arriving out of the woods with the body of a dead girl and with no idea how it happened, it is assumed he murdered her. Jon has a reoccurring flashback of the last event he experienced in combat: where he accidently killed a civilian who was running to him for help. It is assumed that due to a flashback brought on by a thunderstorm, Jon Shepherd has done it all again.

Only Emily doesn’t believe it.  She remembers her dad as the kind, storytelling figure that existed before his last Tour of Duty. She knows he could never murder an innocent girl, even while in a flashback.

I became interested in PTSD because I was fascinated by how a person’s personality can change completely as a result of an experience they’ve had. For combat soldiers particularly, the change often seems most extreme: fighters moving from being previously proud and capable protectors to being crumbling, scared and defenceless.  As a writer I am always interested in extremes and in how people move between them. I am also interested in different states of reality that mental disorders, as well as substance abuse, may provide. And I am interested in uncovering a more fuller understanding of why people may do the things they do. I researched PTSD through talking to retired combat soldiers and through reading articles and books about the disorder. My account of the disorder is not based on any one true experience and is a work of fiction. I tried to get across the fear of what it may be like to live with a family member suffering from this debilitating disorder, but I admit it may not always be entirely accurate to any individual’s experience.

For further research into PTSD, and into how mental ill-health affects ex-Service men and women of all ages, check out the wonderful and crucial work of the charity Combat Stress – www.combatstress.org.uk
Written by Michelle Fluttering Butterflies at 05:59