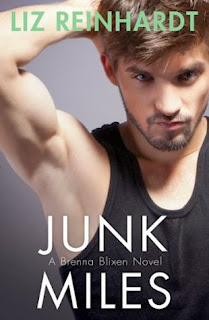 Junk Miles by Liz Reinhardt is the second book in the Brenna Blixen series. I really enjoyed the first book in the series, Double Clutch.  I liked the main character, Brenna, and the way in which she struggled between cultures having just returned to the US from living abroad in Denmark, and also how she chose to split her high school schedule across a normal school and a technical college. Her life is further complicated in the first book because she fancies two very different boys - Saxon and Jake.  Because Brenna does make a decision about her romantic life at the end of Double Clutch I was worried that subsequent books in the series would take a very dramatic turn in order for there to be continued conflict. I'm happy to report that Junk Miles never took a turn for the silly or over the top dramatics.

In fact, I really liked the way that Junk Miles played out. I found g Brenna's openness and honesty really refreshing and I loved exploring Saxon as a character more.  If you haven't read Double Clutch as yet, here is where the spoilers come in. You've been warned!

Brenna chooses to be with Jake over Saxon and at the start of Junk Miles, she's ridiculously happy with Jake and with their relationship.  Except that she's really not. And it takes a surprise trip to Paris with her mother (and with bad boy Saxon!) for Brenna to realise that there are aspects of her relationship with Jake that make her feel uncomfortable.  And there's still all that pent-up attraction and strong feelings she has for Saxon that Brenna has no idea what do with. So, she breaks up with Jake (over the phone!) and impulsively jumps into a thing with Saxon. There are probably ten billion better options to go for than the choices Brenna makes but I kind of got where she was coming from. The rest of the book sees Brenna dealing with the aftermath of her break-up with Jake, getting to know Saxon better and mulling over what craziness she let in that would explain her behaviour.

Saxon is a wonderful character - obviously good-looking and charming and involved with some suspect things but he's also really vulnerable and sweet. He's really broken up with the state of his family and over the ruined state of his relationship with his former best friend/half-brother, Jake. While I didn't much for his character in Double Clutch in this book my mind was completely changed about his motives and about his feelings for Brenna and Jake.

I do wish things had become better resolved in this book though. I think the resolution and forgiveness of what went down with Jake and Brenna was tied up a bit too neatly and things weren't as properly addressed as I'd have liked them to be. I kept waiting for this big heart-to-heart between Jake and Brenna that just never happened. And I wish more focus had been on running/cycling/motor cross like in the first book. Still. I'm excited to read the next book following Jake, Brenna and Saxon, Slow Twitch. Hopefully the problems I had with Junk Miles will work themselves out in that.

I'm really surprised by how much I've enjoyed this series!
Written by Michelle Fluttering Butterflies at 07:31