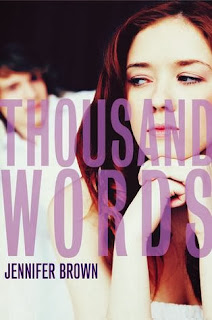 Thousand Words by Jennifer Brown is a book that I bought in hardback awhile back and was really excited about reading. I've really enjoyed Jennifer Brown's hard-hitting subject matters and I found the idea of a book about a girl trying to get over and get past the fact that her ex-boyfriend spread around a naked picture that she'd sent him.

Thousand Words isn't quite what I was expecting at all. In some ways I found it difficult to adjust to the very informational tone of the novel.  At certain points in the beginning and middle that it felt like this book was more a means of getting across a particular message about sexting and the consequences (both emotional and legal!) and it lost its way with the characters.  But then towards the end I was very surprised to learn that I had, in fact, become quite emotionally invested in the story and I really cared about what happened to them.  The two main characters, Ashleigh and Mack especially.

Thousand Words is told in both the past and present tense as Ashleigh recalls her relationship with her older boyfriend, Kaleb.  During the summer before her junior year in high school and before Kaleb's freshman year at university Ashleigh sends Kaleb a naked photo of herself when she is drunk at a party. She's feeling really insecure about her relationship and feels like this is a good way to draw them closer together. I found it interesting to read this part of Ashleigh and Kaleb's relationship.  But then of course, things go wrong and they break up.  And it's horrible. And the photo ends up being sent around to Ashleigh's schoolmates and the humiliation and  cyber bullying begins.

In the present day, we see Ashleigh attending a community service programme that requires her to research and produce a pamphlet helping others in her same situation. There she meets Mack who becomes a friendly face and someone who she can rely on when everything else - her family, her friendships, school - is crumbling around her. I really loved the friendship between Ashleigh and Mack. There isn't overly romantic in it but he is definitely the person who helps Ashleigh the most and at a time when she most needs it.

In the end, I really enjoyed Thousand Words. Sexting is something that happens a lot more regularly and is quite relevant to teenagers today. I found it surprising the effects of a seemingly innocent act in terms of the legal aspects of it all. I found it quite heartbreaking to read how judgmental everyone in Ashleigh's life is and how badly she is treated by everyone else without knowing all the facts.
Written by Michelle Fluttering Butterflies at 08:20