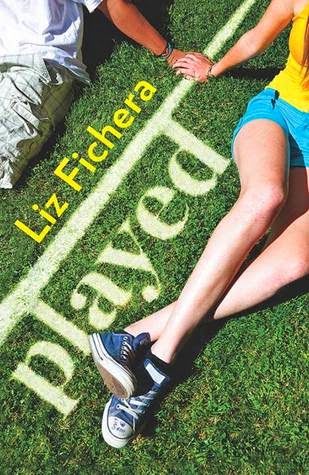 I enjoyed reading Played by Liz Fichera.  It's a companion novel to Hooked which I had read and also enjoyed last year.  Out of the two books, I think I preferred Hooked, but Played was quite sweet too.  I think Sam was a wonderful main character and I really do love that this series of books features Native Americans in such a prominent way. I'd have loved to have discovered these two books as a lonely, bookish Native American myself.

While I don't think you necessarily need to have read Hooked before you read Played, I do think things would be slightly less confusing.  In case you haven't read Hooked (and look away now if you don't want spoilers) the main characters of that book were Fred and Ryan, who ended up in a romantic relationship despite not getting along at first. Fred had a good friend, Sam, another Native American who lives on a reservation with her who admitted that he loved Fred during Hooked. She lets him down easy but their friendship isn't quite the same afterwards.

Now Played tells the story of Sam (Fred's former best friend) and Ryan's little sister, Riley.  Sam and Riley are worlds apart until on a school trip Sam and Riley get separated from everyone else and Sam rescues Riley from falling off a cliff.  They talk and somewhere in between being rescued and getting to know Sam, Riley comes up with this crazy plan to win the heart of Fred despite being happily involved with Riley's brother.

I really adored Sam, I thought he was lovely.  I thought his feelings for Fred came through really strongly and I loved the development those feelings took throughout the book.  Sam, when we first meet him, is kind of closed off from everyone else and he doesn't really do anything to let him connect with other people outside of his small circle. It was nice to see him grow as a character. It felt like he needed someone like Riley to shake things up and force him to expand his boundaries. He was the reason I liked this book as much as I did!

I couldn't quite connect with Riley as much, though. Mostly because she's hell-bent on breaking up a relationship that didn't need breaking up.  I think she lost sight of something in her quest to 'pay back' Sam and didn't quite realise how much she was hurting everyone involved.  I kind of got Riley's rebellious attitude and the fact that she does some things because of how her family react differently to her than to the behaviour of her older brother. I like that that plays into this story line but also at times I really didn't like Riley as a character.

Overall, an interesting story. It was sweet and heart-felt and I loved seeing how the relationships progressed throughout the story, both of the new characters and also the older characters we'd met in Hooked.
Written by Michelle Fluttering Butterflies at 08:43