I'm really happy to be taking part in the blog tour for Killing Sound by Paul Southern, a terrifying story about the London underground and sound waves.  I started reading this book late at night, on my own, in a creaky house and I just couldn't do it. If scary books are your thing, I'd recommend this one! 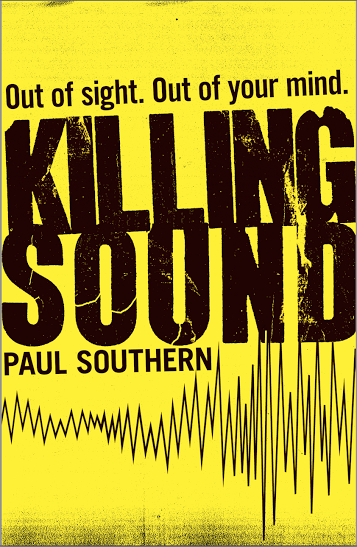 It is fair to say that my previous novels contained more than their fair share of violence and sexual content. Indeed, there was a surfeit of it. I was dramatizing the lives of young people in Manchester the way it is really lived on the streets. Having taught all ages from 5 to 21, I  also have a good idea of age appropriateness when it comes to writing for and about children. For example, I think most people would agree that giving 11-year-olds a dose of expletives and violence is probably not a good thing (although 11-year-olds play computer games with just that content). Most people would also agree that 13-year-olds should be protected from these things. By the age of 16, however, with the odd exceptions, and despite our best attempts to protect them, most children swear, are aware of what sex is, and have seen 18-rated horror films. The rites of passage have already begun. All of which leaves that difficult 13-16 age range in limbo.

Teen fiction purportedly covers the ages 10 to 15, while Young Adult covers 12 to 18, or maybe even older. The lines between children’s fiction and YA and adult fiction are policed by adults, of course, who have often forgotten what it was like to be young, and like to read on their behalf. Meanwhile, children just want to be adults. Increasingly, the age they do so gets younger and younger. It’s difficult enough to set boundaries as a parent, never mind as a guardian of the nation’s youth.

From its inception, Killing Sound was a book written for YA and adults. It was never written for 11-year-olds. Or for 13-year-olds, for that matter. The lowest age I thought would read it was say 14/15. In other words, well on the way to adulthood, coming to grips with growing up, and being aware of the world around them. I was consciously aware of this as I wrote it, edited it, and re-edited it. As a writer, you set your own bounds.

Frankly, I think there is no difference in writing for YA and adults, except that, in the former, you’re writing largely for teen protagonists. You should never patronise your reader. You are still telling them a story. If a story for a 13-year-old has the word ‘fuck’ in it, society isn't going to collapse. My 12-year-old daughter has used the word talking to friends. I didn't want her to use the word. I’d rather she used a different one, but I guess my parents would have said the same thing about me. Kids want to use the word; it makes them feel grown up. Part of its appeal is the stupid taboo about it.

Swear words should not be taboo. If they are used in context (or even out of it), they are appropriate. The author is best placed to judge this. No one knows their work like they do. The same goes for sex and violence. It isn’t just profanity and graphic content, either. Difficult or obscure words are sometimes deemed unsuitable for young adults. If a child or young adult comes across a word they don’t know, they should be reaching for a dictionary, not the remote control. How else do they learn?

Killing Sound has its fair share of violence. It also has a lot of horror in it, both psychological and physical. I think it is important for kids to confront these things, just as the characters have to. Children know what’s at stake. It is only when you measure life against the alternative that it carries any meaning. Death is a constant in the book – not just coping with it, but the experience of it, and understanding what it means to die. Philip Larkin once starkly said, ‘Life is first boredom, then fear. Whether or not we use it, it goes.’ The quote is pinned to the wall above my desk. A good horror novel (or movie) helps us confront that fear and makes us feel more alive. That’s something children, young adults and adults can benefit from.