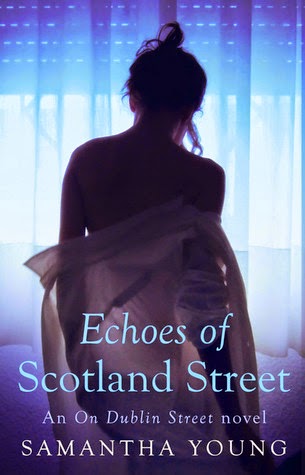 I think I'll always be quite excited to read another book by Samantha Young, especially in this series.  I was particularly excited by Echoes of Scotland Street because it features one of my favourite ever characters from the On Dublin Street series of books: Cole.  I really fell in love with Cole as an awkward teenager in Down London Road. But now he's all grown-up and it's his turn to find love in this new book. And man, did I love taking this journey with him.

Echoes of Scotland Street tells us this story of Shannon MacLeod, a girl carrying around a bit of baggage from her previous relationship.  She's decided to move to Edinburgh for a new start and finds a job at a tattoo parlour where she meets sexy Cole Walker.  Immediately Shannon thinks she knows exactly the sort of man Cole is based on his appearance and how strongly Cole comes onto Shannon and she's determined to avoid him at all costs.  Unfortunately (or not!) Cole doesn't share her opinion.

While I do love the sex appeal of Cole Walker and the chemistry between him and Shannon, I did think it was a little bit hard to really get behind Shannon and her perspective of Cole from the beginning. And this is because fans of this series will already be familiar with Cole and know that he's as far from the 'tattooed, bad boy' that Shannon thinks he is - with an attitude and lack of respect for women.  Readers will know this about him but it takes Shannon a lot longer to come to this realisation and in the time it takes her to realise this she's already said and done mean, unfair things to poor Cole which didn't endear her to me initially.

Still loved it though.  Samantha Young writes such wonderful stories that are yes, filled with amazing  and intense romance, but also amazing friendships and this sense of family that goes beyond biological relationships.  A previous criticism of books in the series was that a lot of back story was hashed out unnecessarily but I didn't find that in Echoes of Scotland Street at all.  I thought the story progressed at a great pace and that all of the secondary characters played their parts very well.  I loved seeing Cole's friendship with Hannah from a different perspective and also seeing how Cole fits into this whole On Dublin Street family from an outsider perspective.

A lot of the story line does revolve around Shannon gaining confidence in herself and her abilities again after an abusive relationship and I thought that the author handled this aspect of the story really well.  I love that not only do we see Shannon falling in love with a great guy who for the most part is really understanding and supportive, but also that she manages to find friends, a life, and she's able to explore her own creative side in this book.  I like that in my romance novels. But it isn't just that Shannon is broken and Cole fixes her, they both are coming from dark places and able to explore moving forward together.

Echoes of Scotland Street was captivating and addictive and sexy as hell! I was gripped right from the very first page and Cole Walker is now my absolute favourite Samantha Young love interest. He's so passionate and straight-forward that I couldn't help but fall for him wholly and completely! I highly recommend this book and this series!
Written by Michelle Fluttering Butterflies at 08:00