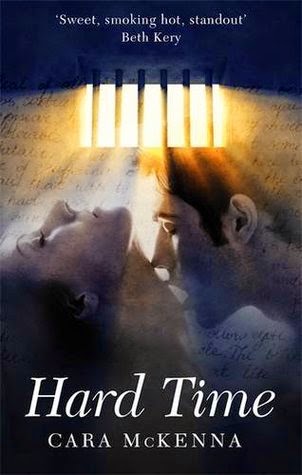 I wasn't quite sure what to make of Hard Time by Cara McKenna when I first received it.  Adult romance isn't something that I read a great deal of AND it's a story about a romance involving a convicted criminal whilst he is in prison (which sounds more than a bit iffy!) but this book came along at a time when I was feeling adventurous... and I'm really glad to say that I absolutely loved it and after reading it I immediately decided to seek out more books by the same author.  There was just so much to enjoy about this book that I couldn't resist.

So, Hard Time tells this story about Annie, a librarian, who as part of her job goes into a prison once a week in order to run different courses for the inmates in order to promote literacy.  On her first day she sees Eric, one of the prisoners, and she's immediately drawn to him: his sexy good looks, his bad boy vibe. And this crazy and intense attraction is shared by Eric. And very quickly, Eric ends up writing Annie a love letter.

Now honestly? I think I could fall in love with the most unsuitable person in the world once he's written a love letter.  There's just something about putting thoughts and feelings into words that can make most things sexy.  And while I feel like things between Eric and Annie get a little hotter a little quicker than perhaps I was ready for, I really enjoyed seeing how things progressed between the two of them. Also, I loved that there was more to this story that each of the characters had to overcome.  In particular, Eric's dysgraphia was an interesting addition to the story. I'd never heard of the term dysgraphia before but I assume it's more common than most people realise.

Eric and Annie are an interesting couple. Annie is still reeling from a past abusive relationship and at times I felt uneasy about her exchanging letters with Eric considering her background, but I could also see quite clearly that through Eric she was reclaiming something that was taken from her. I liked witnessing her grow in confidence again. And as for Eric, as I was reading, I was thinking it could have been a lot easier for Cara McKenna to turn his character into something easier for reader to digest - if, for example, Eric was innocent of the crime or if the crime was something more 'acceptable' - it would have been a lot easier for readers to fall for him and root for happiness for all involved. Instead, we have a convicted criminal charged with assault who has committed the crime and admits to choosing the same course of action in future.  It really made for interesting reading when Annie learns of this and watching her struggle with this information as well as her growing attraction not only to Eric's physicality but also to what she reads in his incredibly romantic, sexy letters.

I was really surprised by how addictive I found this book.  I found myself really sympathising and relating to both of the main characters and I did want the best for both of them. I felt really sorry for Eric throughout because in his letters and the way he speaks and behaves, it really does come across as him not believing that things can be real between him and Annie, especially when the two have to face the realities of an actual relationship.  Hard Time was a really sexy, emotional and addictive story to read and I really did love it.
Written by Michelle Fluttering Butterflies at 10:25