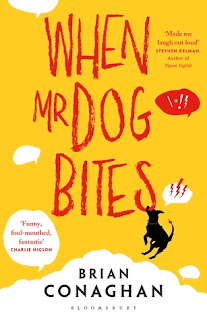 I really enjoyed When Mr Dog Bites by Brian Conaghan. I started reading it last year when I received a hardback copy of this book for review and I loved Dylan's voice in particular. But for some reason, I put the book down and didn't return to it. Until now, when in an attempt to read more UKYA and more diverse books, I thought that I would pick this book up again and give it another go. I'm really glad that I did.

When Mr Dog Bites is Dylan Mint's story. He's a 16 year old boy living in Glasgow with his mother and he has Tourette's. At a doctor's appointment, Dylan overhears his mum and doctor saying that Dylan has a year left to live. With this new, scary knowledge Dylan decides to make a bucket list. He has just three things on his list.

1) He'd like to have sex. Particularly with Michelle Molloy a girl at his school.
2) He wants to make sure his best friend, Amir, has friends and isn't all alone after Dylan dies.
3) He'd like his father home from the army.

It isn't easy completing these tasks at all. He's up against his own physiology with the first (what girl is going to like it when she offensive things at her?), battling racism in the second and fighting the impossible with the third. But throughout this story, I was really rooting for Dylan. He had amazing presence and voice in this book and I couldn't help but be very emotionally involved in this story.

There were a few things especially that I loved about this book:

The first is the way in which language is used throughout. Dylan adopts some Cockney rhyming terminology and also fuses different types of language into his own unique style and it really made me happy. He also lives in Glasgow and his accent comes through when he's speaking and there was some phrases where I could guess the meaning but had never come across before. This of course is separate from his outbursts of swearing. He deliberately chooses his own language but it cannot be helped what he shouts out from time to time. Prepare yourselves for lots of swearing and offensive language in this book!

Another thing I really liked about the book is that it paints a much clearer picture of what it might be like both to have Tourette's but also what it might be like to attend a special school like Dylan, Amir and Michelle attend. All three face different types of abuse but we also get to see them as individuals and learn their stories and I thought all three were fantastic. With Dylan, I'm sure I had plenty of preconceived misconceptions about what Tourette's is and he helped me become better educated and sympathetic. There were times, especially when he felt very down about his doomed love life, that I really felt for him and began to realise how very difficult it is to do or have things that other people take for granted.

But of course the thing I loved the most about When Mr Dog Bites are the relationships. Dylan's friendship with Amir. His interactions with Michelle. The way he treats the poor taxi man. But especially Dylan's relationship with his mother. There's something really sweet but also incredibly realistic about their relationship. It isn't cheesy or overdone but it just felt so believeable.

I absolutely loved this book and I'm really glad to have read it!
Written by Michelle Fluttering Butterflies at 08:00