Today I'm really happy to be taking part in the Claire McFall blog tour celebrating the re-release of Ferryman as well as the publication of the sequel, Trespassers. I remember I wasn't entirely sure if this book would be for me when Ferryman was first published but I'm so glad that I gave it a chance. If you too are unsure or on the fence about reading it then perhaps the extract below will help you decide! 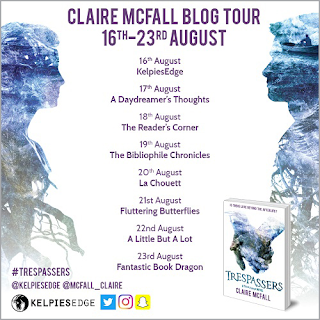 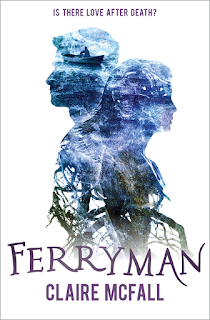 “Wait, stop! Where the hell are we going?” Dylan huffed to a standstill and cemented her feet to the ground, folding her arms across her chest. She ’d been blindly following him, but they had been marching for twenty minutes in total silence now, going in who knew which direction and he hadn ’t said a word since the curt “Come with me.” All of the questions, all reasons for staying at the tunnel mouth that had inexplicably vanished from her head when he ’d ordered her to follow had now returned with full force.

He continued on for a few strides, before turning and looking at her with his eyebrows raised. “What?”

“What?!” Dylan ’s voice rose an octave with incredulity.

“We’ve just come out of a train crash where everybody else seems to have disappeared. I have no idea where we are, and you are marching us halfway across the middle of nowhere, away from the place where they are going to be looking for us!”

“Who do you imagine is looking for us?” That arrogant half-smirk snuck back onto his lips.

Dylan frowned for a moment, confused by the strange question, before launching into her argument once more. “Well, the police for one. My parents.” Dylan felt a little thrill at being able to say that in the plural for the first time. “When the train doesn ’t arrive at the next station, don ’t you think the train company might wonder where it is?”

She raised her eyebrows here, secretly pleased with the strength of her line of reasoning, and waited for him to respond.

He laughed. It was almost a musical sound, but underpinned with a hint of mockery. His reaction confounded and infuriated her again. Dylan pursed her lips, waiting for the punchline, but it didn’t come. Instead he smiled. It changed his entire face, warming his natural coldness. But there was still something not quite right about it. It looked sincere, but it didn’t stretch to his eyes. They remained icy and aloof.

He walked over to Dylan and ducked down slightly so that he could look into her eyes, shocking blue into startled green. His closeness made her a little uncomfortable, but she stood her ground.

“If I told you you weren’t where you thought you were, what would you say?” he asked.

“What?” Dylan was totally confused, and not a little bit intimidated. His arrogance was maddening, making fun of her at every turn and coming out with nonsense statements like that. What could be the point of his question except to bamboozle her and make her doubt herself?

“Never mind,” he chuckled, reading her expression. “Turn around. Could you find the tunnel again if you had to?”

Dylan looked over her shoulder. The landscape was empty and unfamiliar. Everything looked the same. Stark, windswept hills as far as the eye could see, dipping down into gullied valleys where vegetation revelled in the shelter from the constant gales. There was no sign of the tunnel entrance or even the train tracks. That was weird; they hadn’t gone very far. She felt a tightening in her chest as she realised that she had no idea what direction they had come from, that she would be completely lost if Tristan left her now.

“No,” she whispered, grasping how much trust she had put in this unfriendly stranger.

Tristan laughed as he watched the realisation trickle across her face. “Then I guess you ’re stuck with me.” 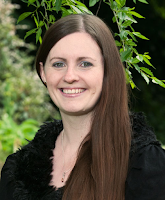 Claire McFall is a writer and a teacher who lives and works in the Scottish Borders. She is the author of paranormal thriller Black Cairn Point, winner of the inaugural Scottish Teenage Book Prize 2017. Her debut novel Ferryman won a Scottish Children’s Book Award, and was nominated for the Carnegie Medal and shortlisted for the Branford Boase award. Her other books include dystopian thriller Bombmaker.

Trespassers, the much-anticipated sequel to Ferryman, will be published on 14th September 2017.
Written by Michelle Fluttering Butterflies at 08:00