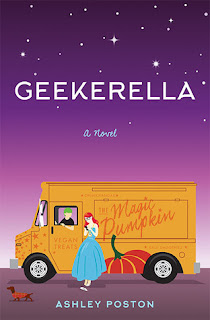 I absolutely adored Geekerella by Ashley Poston. It was such a fun book celebrating fandom and reading it made me really happy! It's a modern day fairy tale retelling of Cinderella but with the added bonus of including cosplay and conventions.

The main character of Geekerella is Elle, a total geek. She's really into this TV programme, Starfield, and becomes increasingly excited about this cosplay competition where the first prize is attending a Cosplay Ball where the main guest is meeting the actor set to play Prince Carmindor in the new movie adaptation. However she doesn't have a lot of support at home from her step-mother or her snobby step-sisters who never really understood Elle's Starfield obsession or how it makes her feel connected to her dad who passed away.

Meanwhile, Darien Freeman is hoping he's up to the task of being the fandom's Prince Carmindor. He's been a total fanboy his whole life and this role is his dream come true. But he's kind of buckling under the pressure of fan's expectations and also his father's who seems to be intent on controlling everything he does.

I think what I love so much about this book is that the bare bones of the Cinderella story is there in playful little details - Elle works at The Magic Pumpkin, a vegan food truck for instance - but there's a story here all of its own.  About friendship and fandom and conventions and finding that place to belong. Some of my favourite elements to the story are the ways in which strangers reassure Elle and even help her out towards the final parts to the story.  I loved her budding friendship with colleague and the ways the characters end up connecting with each other.  I also found it rather sweet how Elle and her father's relationship plays such a large part in the story.

Above all though, Geekerella is just so much fun.  It really spoke to the geek in me and I hope it will do the same for you!
Written by Michelle Fluttering Butterflies at 08:00