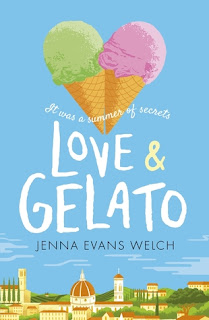 I'm not even sure what I was expecting when I picked up Love and Gelato by Jenna Evans Welch to read.  Probably just a light, fluffy summer romance story.  And I like light, fluffy romance stories! I'd have been happy if that's what it ended up being ...but it really wasn't.  It's a book set during summer. And there is a hint of love in it.  But for me, this book is about grief and family and secrets than it is about anything else.

Lina, our main character, is pretty beaten up at the start of this book.  Her mother has just died of cancer and following her mother's dying wish, she's now in Italy with a man she's never met or heard of, Howard.  It's a pretty confusing time for Lina and she's more than a little bit confused and angry that her mother never told her anything at all about her father before she died.  But now Lina has possession of her mother's diary from when she lived in Italy as a student and together with neighbour, Ren, she goes off in search of answers.

I did very much love the setting of Love and Gelato.  I think there can't be enough YA books set in Tuscany or just Italy in general.  I think it's a wonderful setting, not just for falling in love but also finding out about your parents and about yourself.  All things Lina gets up to during the course of this novel.  There are the sights and sounds of Italy here and also the taste of gelato.  I read books set in Italy and it makes me itch to travel there again. I love that.

There's quite the mystery in this book about what actually happens to Lina's mother all those years ago.  Why she left Italy and didn't mention Howard again.  What must have happened between her parents for Lina's mother to not tell her a single thing.  I'm not always a fan of diary entries or this dual timeline, but I think it worked in this book.  Even though I'm not sure the spacing out of Lina reading the diary entries (and acting all impulsively before reading the entirety of the diary!) was quite believable for me. Still. I understood that it needed to happen that way to maintain the pacing of the book.

I think the thing I enjoyed the most about this book though are the relationships within them.  It's cute how Lina and her neighbour, Ren, get on.  Lina's massive crush on another Italian boy.  Her friendship with the girl back hom.  But I think it's really Lina's relationship with Howard that is at the heart of this novel.  There was something really endearing about Howard. Right from the first time we meet him he stomped right up to my heart and got comfortable there.  I love stories about family and figuring stuff out later in life.  And the way Howard is with Lina kind of just made feel really emotional.  Even when I completely didn't expect it.

So, Love and Gelato was a total surprise for me and I recommend it!
Written by Michelle Fluttering Butterflies at 08:00