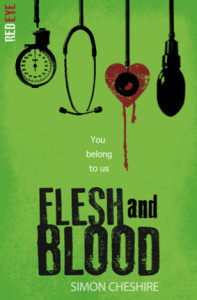 I really enjoyed Flesh and Blood by Simon Cheshire. It had just enough levels of creepiness and unease throughout for me to remain really hooked on the story and wondering what would happen next?

Flesh and Blood reads like a thriller as the main character, Sam, is this teenage boy who moves into a new neighbourhood and is keen to flex his burgeoning journalistic muscles by investigating and writing an article about the dead body that has appeared in the area.  As he begins to ask questions, he begins to piece together this rather odd and ...unsettling series of events that possibly relate back to his next door neighbour.

Honestly, I really liked this book.  I like Sam and the ways in which he goes after this story, how he writes about his experiences with some measure of hindsight.  I found his new friends to be entertaining, his crush on the prettiest girl in school, Emma, was rather entertaining.

But ultimately this is a horror story.  And as I was reading this, I feel like the levels of creepiness was rather subtle in the beginning and it just built over time.  Dead bodies, creepy old houses, strange sounds in the night.  But also this feeling of powerlessness as the adults in this story seem a little zombie-fied of no control of their own which leaves poor Sam and his friends fighting against something big and terrible and really rather scary. I loved the medical elements included in the horror and I'm really just pleasantly surprised by how much this story got under my skin.

If you're looking for a creepy scary read around Halloween I really recommend this book and the entire series of Red Eye titles!
Written by Michelle Fluttering Butterflies at 08:00