REVIEW: The Haunting by Alex Bell 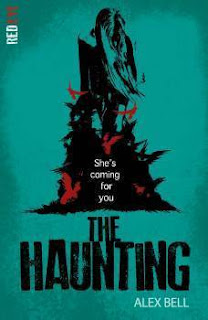 The Haunting by Alex Bell has a really interesting concept.  I love the idea of a cursed Cornish inn, the idea that it ties into witches and a witch's curse and that the main character comes back into the story 7 years after being injured in an accident at the inn.  However, The Haunting never quite lived up the chills promised from such an intriguing premise.

The setting of this book is The Waterwitch, a Cornish inn that is made from the salvaged timber of a cursed shipwrecked boat.  Our main character is Emma, she's 17 and is in a wheelchair after an accident at the inn occurs when she's 10.  Her family moved away and she's never been back to The Waterwitch.  That is, until her nan, who owns the inn, falls ill and Emma chooses to spend her half term break visiting her grandmother and reacquainting herself with The Waterwitch and also with her old best friend, Jem, and his younger sister, Shell. Ghosts and hauntings ensue.

I think part of the problem for me with The Haunting is that we have a high level of creep factor already.  We've got this creepy inn, an interesting back story and characters with complicated relationships that should provide plenty of tension.  However, I was a bit let-down with the ways in which Emma and Jem interacted with each other.  In that, they barely interacted with each other, despite having what could have been an intense meeting fraught with guilt on Jem's part in his role in Emma's disability or with longing and nostalgia for what they had as a friendship as children? But they had very little to do with each other throughout the story and it was such a disappointment.  And while my expectations we're set that high for the horror or scary elements to the story, I didn't think it was ever realised for me.  I think perhaps the story and build-up towards a frightening ending were just a little bit too subtle for me.

What I did love about the book is Emma's relationship with her guide dog, Bailey and it's Emma and Bailey that I felt provided the emotional heart to the story. I just wish a little bit more was done with the relationships in the story and also with the elements of the paranormal.
Written by Michelle Fluttering Butterflies at 08:00