Reading Diary: The Sidekicks by Will Kostakis 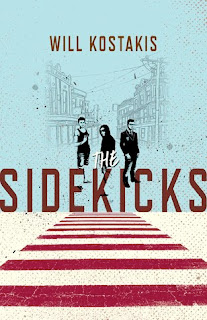 I don't remember where I first heard about The Sidekicks by Will Kostakis?  It must have been an American blog or a link on Twitter.  I feel like every so often I really like to read something that I know nothing about, that I've heard nothing (or very little about).  It makes reading more refreshing for me bringing in that element of surprise that is often lost as a book blogger - even one like me who hasn't kept up with the news or gossip and has entirely fallen off social media over the past year.

For whatever reason, I became aware of this book, had it downloaded onto my  Kindle and earlier this year chose it to read knowing absolutely nothing about it beforehand.  It turned out to be a good gamble.  I really enjoyed reading this one.  It's told in three parts each part from the perspective of either Ryan, Miles or Harley.  These boys have nothing in common, they don't like each other, their only link is that they were each friends with Isaac, who at the start of the story has died.

I loved the exploration of friendship, identity and grief in The Sidekicks.  The boys are so vastly different: a nerd, an athlete, a rebel.  But the ways in which each of them finds common ground with the others usually begrudgingly was really sweet to unravel in this story.  I also liked that whilst each of the boys had a strong element of identity at the start: Swimmer, Rebel, Nerd, by the end of it each of the boys had much more complexity to themselves and within their friendship group.  Also, the treatment of their grief was really well done. Plus points also for the LGBT story line of a main character and someone tell me why AusYA is so appealing to me?

I think part of my enjoyment of reading this book is because in high school I perhaps took some elements from this book for granted a little too much.  I fell into a friendship group and never really questioned 'are these friends the right people for me? are these friendships providing me with what I need?' and also I never really fought against the identities that other people figured me for.  I think it took me a really long time to work out these tough but important considerations.

It's been several months since I finished The Sidekicks but I'm super glad that I gave this book a chance.
Written by Michelle Fluttering Butterflies at 12:52