Interview With the Vampire by Anne Rice 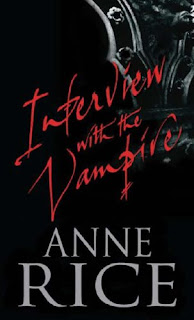 This is the story of Louis, as told in his own words, of his journey through mortal and immortal life. Louis recounts how he became a vampire at the hands of the radiant and sinister Lestat and how he became indoctrinated, unwillingly, into the vampire way of life. His story ebbs and flows through the streets of New Orleans, defining crucial moments such as his discovery of the exquisite lost young child Claudia, wanting not to hurt but to comfort her with the last breaths of humanity he has inside.

This book surprised me. I thought it would be trashier. I've seen the film, but didn't take much from it. Or at least I thought I didn't until I started reading this and ended up with Brad Pitt's voice in my head narrating. I enjoyed the book, but I found Louis's incessant philosophising a little tedious in some parts. Rice explores some interesting themes, and I loved the rich detail of New Orleans but it felt a little flat sometimes. Maybe I've read this book too late and after too much saturation in books and movies about vampires and morality.

Read an interview here with Anne Rice including study questions, if you so wish.

(On other vampire book news, who else is counting down the days until Breaking Dawn is released?!)

This completes the required 10 books to be read for the 1% well-read challenge, but I'm having too much fun to stop now...
Written by Michelle Fluttering Butterflies at 08:00