Did anyone else watch the BBC's adaptation of Anne Frank's Diary last week? I'm still catching up and only finished watching it a few days ago. It was a 5 part mini-series with each episode being 30 minutes long.

I first read Diary of a Young Girl when I was 11 or 12. I felt connected to Anne is so many ways. I loved her voice, her sense of hope. It was her diary that opened my eyes to World War II. I became obsessed after that to read what I could of other experiences during WWII. It's something I'm passionate about, even now. When I started my first journal around this time, I began each entry with 'Dear Kitty' and when I started my first blog many years ago, I included the passage in which Anne writes about how no one would be interested in the musings of a 13 year old girl.

Watching the TV adaptation has made me realise how deep my affection is for Anne Frank, how much I've taken the suffering that happened during this period to heart, and especially that there is more I'd like to accomplish on my Lifelong list of goals including visiting the Anne Frank House in Amsterdam and visiting a concentration camp, possibly Auschwitz.

My dad was able to go to Amsterdam a few years ago in which he visited the Anne Frank House and bought this gorgeous book for me. I've included a photo of a random page, which shows pictures of some of the Hollywood film stars that Anne collected. I think if there's any book that I'd like to re-read this year, it will be Anne Frank's Diary of A Young Girl. 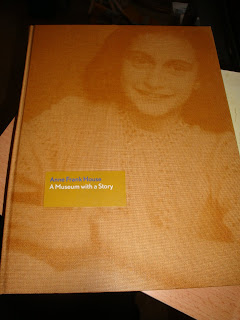 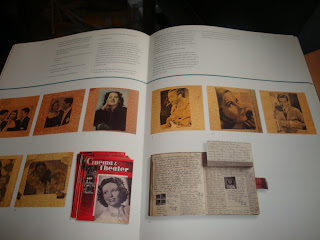 And finally I twist my heart round again, so that the bad is on the outside and the good is on the inside, and keep on trying to find a way of becoming what I would so like to be, and could be, if there weren't any other people living in the world.

I don't think of all the misery but of the beauty that still remains.

I keep my ideals, because in spite of everything I still believe that people are really good at heart.

The best remedy for those who are afraid, lonely or unhappy is to go outside, somewhere where they can be quiet, alone with the heavens, nature and God. Because only then does one feel that all is as it should be.
Written by Michelle Fluttering Butterflies at 06:32