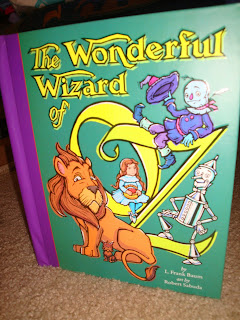 This is the first Robert Sabuda popup book I bought. I had never heard of him or his popups until N told me about this display of these books in a rival bookstore. He told me about them because I'm a big Wizard of Oz fan, but the popups are so amazing that I was immediately hooked. 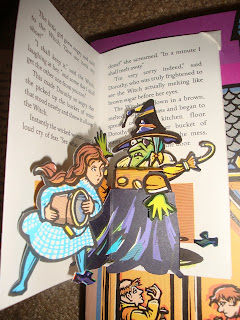 In this book, there are seven main pop-ups including The Emerald City, the cyclone that sweeps Dorothy into Oz, the Wicked Witch of the West and her flying monkeys, but each page also has several smaller pages including mini pop-ups such as Dorothy pouring water on the Wicked Witch. 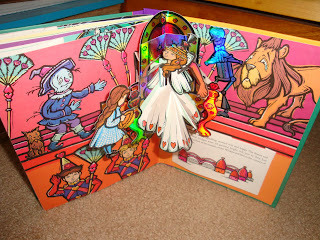 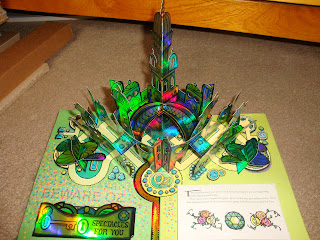 Also included is a pair of 'spectacles' for use in the Emerald City. I'd never noticed before, but there is a 'suitable for 6 years and over' notice on the back of the book. My book came in its own plastic wallet that I use to keep grubby fingers away.

The story itself is an abridged version of L. Frank Baum's The Wonderful Wizard of Oz but I am amazed at how much of the story is present. I would have thought that a lot more of the story would be sacrificed for the artwork, but I was pleasantly surprised.

See other popup books by Robert Sabuda and a lot more over at his website robertsabuda.com
Written by Michelle Fluttering Butterflies at 07:20