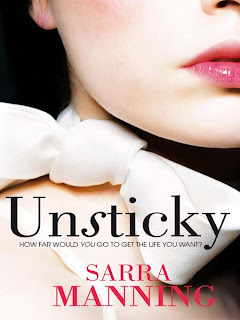 It was a beautiful day today. One of those days where I wished I'd been able to lounge in the garden with a nice light, summery read and bask in the sun. But it wasn't meant to be.

N and the boys and I made an appearance at Legoland in the morning but when Oldest went into meltdown mode because he couldn't sit at the front of the train, we went straight home. It was too hot to be accomodating temper tantrums. And I needed to study. I have a mock exam next week, so I tried to cram a couple hours of studying, but seriously? Reading about social democracy and the welfare state of Britain is such a snoozer. Even without the dire subject matter I probably would have fought to keep my eyes open this afternoon as it was a horrendous night with Oldest finally coming into our bed and then hogging my pillow and my side of the bed.

I did get some reading done. While N was making dinner, I decided to flip through a book I'd only just finished last week. Unsticky by Sarra Manning. Loved it. I can already tell it'll be a book I return to in desperate times. It was kind of an impulse buy the other day, but it's her first adult novel and meant to be the perfect summer read. I second that emotion.

It's been kind of a reread week for me, as I reread another favourite of mine, Born Confused by Tanuja Desai Hidier, which I think I've read once every year. I was really in the mood for some good romantic stories this week and lucky for me, I had them to hand. Nothing better than that.
Written by Michelle Fluttering Butterflies at 18:42