Stuff on my head Part 7 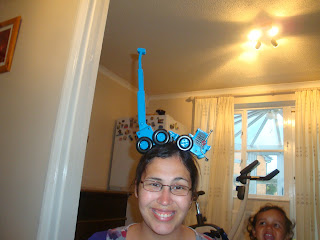 It's funny the phases that kids go through. For the longest time, Oldest absolutely adored the movie Cars. He wanted to BE Lightning McQueen when he grows up. He knew all the cars names from the movie, he pretended to be a racing car. He even said Lightning McQueen was his best friend. And while some of this awe still lingers, and Oldest' favourite colour is still racing car red, he doesn't have the same enthusiasm for it.

Then came the Thomas the Tank Engine phase. I'm not saying this one has finished, but there seems to be a greater overlap period. He loves Thomas. He loves everything to do with trains. He loves the books, he loves the TV programme. He still tells the story of when we went to SEE Thomas the Tank Engine and how The Fat Controller tipped his hat at him. We took Oldest to see Hero of the Rails at the cinema and Oldest loves talking about it. He knows all about coupling rods and funnels and how a train works. I love that he's inspired to learn by some of his favourite characters.

Now, we're in our Bob the Builder phase. It was one that N and I were trying to resist. That Bob the Builder song is utterly annoying. But Oldest has won out. He's convinced his Nana to buy him the different vehicles from Bob the Builder. He asks for Bob books from the library. There's a show at Legoland about Bob the Builder. Even Littlest gets in on this one. He calls it 'Bob-ob' Oldest and Littlest have matching Bob jumpers. So, we have Lofty. On my head.

I wonder what will be next. Please god, don't let it be the Power Rangers. (I'm not sure how I'd able to balance a Power Ranger on my head.)
Written by Michelle Fluttering Butterflies at 07:13

Email ThisBlogThis!Share to TwitterShare to FacebookShare to Pinterest
Labels: nerdfighters, Stuff on my head