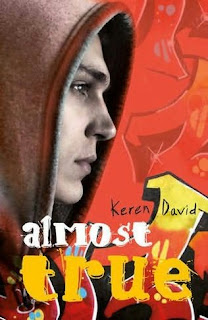 Ruthless killers are hunting Ty so the police move him and his mum to a quiet seaside town. But a horrific attack and a bullet meant for Ty prove that he’s not safe. On the road again, Ty’s in hiding with complete strangers . . . who seem to know a lot about him. Meanwhile he’s desperate to see his girlfriend Claire, and terrified that she may betray him. Ty can’t trust his own judgement and he’s making dangerous decisions that could deliver him straight to the gangsters. A thrilling sequel to When I Was Joe, shot through with drama and suspense.

Phew. What a ride this book is! Almost True is the sequel to When I Was Joe by Keren David which was one of my favourite books that I've read all year. I was absolutely beside myself with excitement to recieve my copy of this book for the UK Book Tours and started it right away - abandoning the other book I had been reading. It was worth it.

Almost True continues with Ty's story. His mum and him have been living in another town under different names and still hiding from the people who are trying to kill Ty because of what he witnessed. ..Only instead of Ty, someone else is shot. So now, Ty is sent somewhere very different and is able to explore another aspect of his identity, one that has life-changing results.

In When I Was Joe I found that was able to be quite funny and charming at times, and in Almost True it feels as though so much has been weighing on him, with his separation from Claire, the guilt for the things that he's done and the knowledge that other people in his life are getting hurt because of what he's put them through has changed him. The tone of this novel is very different. It feels more serious and grown-up. But there is a dog and a new friend for Ty who do lighten up the mood some.

There's a real importance in Almost True to being honest and of the truth. The seriousness and the consequences of knife crime. And lots and lots of making mistakes. Ty messes up pretty badly with the choices that he makes and what's great is that Keren David shows us, too, that everyone important in Ty's life has made some really terrible mistakes as well. And that's OK. Because even though it's a tough road to go down, they've each taken responsibility and were able to move on and have decent enough lives. It's a wonderful message to give to readers and one that isn't said in a heavy-handed way at all.

It's a really exciting read, this one. The story is constantly moving forward and so many new things are learned about Ty and the things that have happened in his past. I did sometimes want to reach into my book and shake Ty for making some of the choices that he does, but his voice and personality are just so likeable that I can't help caring for him as well. So much so that towards the end I had to put my book down and take a little break because my heart absolutely ached for Ty. Everything feels so authentic that it's hard to believe that these characters are fictional.

What are you waiting for? You really must read When I Was Joe and Almost True! Highly recommended.
Written by Michelle Fluttering Butterflies at 09:54