REVIEW: Take Me There by Susane Colasanti 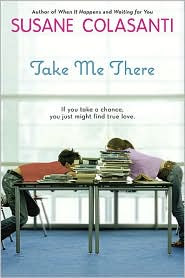 Rhiannon is devastated after the breakup with her boyfriend and wants him back. Nicole’s ex is still pining for her, but she can’t help having a new crush. And then there is James, hopelessly in love with Rhiannon, who can’t see that their friendship can be so much more. Just when things couldn’t get more complicated, the school’s resident mean girl decides she is intent on ruining everyone’s life. James, Nicole, and Rhiannon are not going to let this slide, but will their desire to take down the mean girl bring these three friends exactly what they want?

I seem to be reading quite a bit of Susane Colasanti this year. Take Me There is my third book of hers this year and I am a fan.

Take Me There is told by three different perspectives. Rhiannon, who's a tad obsessed with her ex-boyfriend. He dumps her with no reason, and she's dead keen to win him back. Even if it means doing something entirely out of character to show him just how much he means to her. Then there's Nicole, her best friend who has her own boy problems. She's just broken up with her boyfriend and already has her eye on someone else. No matter that he's entirely unsuitable. And then there's James, who isn't quite ready to admit to himself or anyone else (most especially his girlfriend) his true feelings for Rhiannon.

I'm not always a big fan of multiple perspectives, but this seemed to work out quite well. There is some overlap between the the three central characters' stories, but whenever this happens, there is always more information included so that the scenes feel new. There is a bit of a cliched character, in the form of the school mean girl who ties the three stories together. It's always a bit of a mystery to me how someone as mean as this girl is able to get away with things and also steal someone's boyfriend, but it doesn't really matter. While this seems like it's just a story of teenagers and their somewhat mixed up love lives, it also touches on a really interesting and serious concept of power.

Nicole's character in particular deals with this the most, where her dealings with men have led down a terrible path. Where the people in her life have used their position of authority in a bad way. I don't want to spoil any of the plot though, so I won't say more. It's also illustrated through a secondary character who suffers through a physically abusive relationship with her boyfriend.

Aside from some of these sadder aspects of the novel, I found Take Me There to be another sweet and gentle story. One that has a very satisfying come-uppance to the school bully.
Written by Michelle Fluttering Butterflies at 09:35