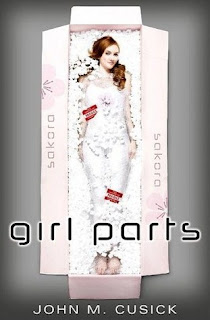 What happens when a robot designed to be a boy’s ideal “companion” develops a will of her own? A compulsively readable novel from a new talent.

David and Charlie are opposites. David has a million friends, online and off. Charlie is a soulful outsider, off the grid completely. But neither feels close to anybody. When David’s parents present him with a hot Companion bot designed to encourage healthy bonds and treat his “dissociative disorder,” he can’t get enough of luscious redheaded Rose — and he can’t get it soon. Companions come with strict intimacy protocols, and whenever he tries anything, David gets an electric shock. Parted from the boy she was built to love, Rose turns to Charlie, who finds he can open up, knowing Rose isn’t real. With Charlie’s help, the ideal “companion” is about to become her own best friend. In a stunning and hilarious debut, John Cusick takes rollicking aim at internet culture and our craving for meaningful connection in an uberconnected world.

I was really looking forward to reading Girl Parts by John M. Cusick. Robots, there's not something you see very often in YA these days, is it? And for the most part, I wasn't disappointed - Girl Parts is an engaging, quick read and holds up an interesting mirror at society and the levels of which we spend using computer-mediated communication which has an effect on our interpersonal relationships. I've actually been studying this a little bit in the last few weeks - the ways in which technologies are playing such a large part in the ways in which we communicate with others. I find it all very fascinating and I feel like I read this book at exactly the right time.

And the psychologists in this book are saying that for the teenage boys in Girl Parts, these high levels of technology are having a severe effect on their mental health. They're becoming depressed and disassociated. A suicide of a classmate early on in the book is a good example of this. She videotapes her death, and it is watched my a great number of people, including David, one of the main characters. The only reaction is one of apathy.

David and Charlie are two very different boys. David is the son of an important man, he's wealthy and popular and he watches this girl commit suicide and feels nothing. So his parents feel that the best course of action is for David to have a female Companion, Rose. (enter the Robot!) Rose is designed to be David's perfect companion. She likes what he likes, her only real pleasure is to make David happy. Only there are certain restrictions in place in terms of intimacy. When things go a bit awry between David and Rose, Rose turns to Charlie. Charlie, who has his own reasons for feeling disconnected and depressed. Together, Rose is able to start having her own thoughts and opinions and is able to decide for herself who to love.

I felt like the thing that got to me the most, was this lack of personal contact. With David in particular. Early on in Girl Parts, he's called into a therapist's office to talk about something very serious in David's life and his parents are there only through the telephone. Something inside of my died a little bit reading this scene. But to balance things out nicely, there's absolutely hilarious interaction between Charlie on a date with a girl he quite fancies. And it's all very awkward and uncomfortable and incredibly funny.

It's a very interesting novel, this one. In a very slim book it brings up a lot of issues worth talking about. This idea of technology thwarting people's abilities to communicate with other people in a normal and respectful way. The treatment of a dissociative disorder and the morality of sponsorship. Free will and love. There's a lot to think about while reading this book. I feel like a lot of Girl Parts was done very well, but something about the ending felt a little off to me.

A huge thank you to Lynsey of the UK Book Tours for this one.

Written by Michelle Fluttering Butterflies at 09:26