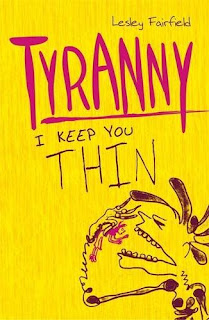 In Tyranny, brisk, spare text and illustrations that deal head-on with anorexia propel the reader along on Anna’s journey as she falls prey to the eating disorder, personified as her tormentor, Tyranny.

The novel starts with a single question: “How did I get here?” The answer lies in the pages that follow, and it’s far from simple. Pressured by media, friends, the workplace, personal relationships, and fashion trends, Anna descends into a seemingly unending cycle of misery. And whenever she tries to climb out of the abyss, her own personal demon, Tyranny, is there to push her back in. The contest seems uneven, and it might be except for one thing: Anna’s strength of character has given rise to her deadly enemy. Ironically, it is that same strength of character that has the ultimate power to save her from the ravages of Tyranny.

Brilliantly and realistically presented, Tyranny is a must-read for anyone looking for a better understanding of eating disorders and for everyone looking for a compelling page-turner that is truly a story of triumph and hope.


A really big thank you to the people at Walker for sending this book for me to review. I've never seen a graphic novel deal with the topic of anorexia before, so I was intrigued with it even before I had a copy in my hands. As some of you may know, I had my own experiences with an eating disorder as a teenager, so it is a subject very close to my heart.

The cover of this really stood out for me. It's very striking, the yellow with the drawing of Tyranny. Right from the cover, I realise that one's going to be pretty powerful. The first question, asked 'How did I get here?' and all the memories of my own eating disorders just washed over me. The idea that our main character, Anna, has this other nasty, mean person, Tyranny, hanging around her, telling her things in order to keep her thin and not eating is carried throughout the graphic novel.

Anna is a young woman struggling with her appearance, her new curves as she goes through puberty. She struggles with how she appears to others and her distorted view of herself. She feels like she's being bombarded with the 'ideal image' everywhere she goes, from friends to colleagues to fashion magazines. She comes across quite a few other women along the way with their own battles with dieting, body-image and eating disorders. And it isn't all rosy. In fact, Tyranny is very straight-forward and blunt in the consequences, if Anna continues to let Tyranny be in control. There's no subtlety in this slim graphic novel. Straight to the point, no beating around the bush.

And I think that's where the power and the beauty of Tyranny lies. This hard-hitting look at anorexia at it's deepest level, I feel, is really necessary in order to get the message through to young people everywhere who still struggle with their own versions of Tyranny. There's no glamourising anorexia here, people with eating disorders can end up seriously damaging their health, end up in hospital, face death.

At first, I wondered if the hard-hitting message was for the best. I wondered if a more personal and emotional approach would be better (I didn't particularly connect with Anna's character but definitely did connect to the message) but now I feel like it's probably for the best. I think the stark and simple illustrations fit with the story's message perfectly and that Tyranny by Lesley Fairfield is quite an important read. Powerful and straight to the point.
Written by Michelle Fluttering Butterflies at 11:08