This is the sequel to Wake by Lisa McMann, I cannot review this book without spoiling certain aspects of the storyline of Wake. 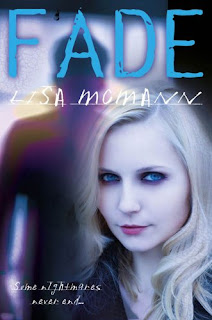 For Janie and Cabel, real life is getting tougher than the dreams. They're just trying to carve out a little (secret) time together, but no such luck.

Disturbing things are happening at Fieldridge High, yet nobody's talking. When Janie taps into a classmate's violent nightmares, the case finally breaks open -- but nothing goes as planned. Not even close. Janie's in way over her head, and Cabe's shocking behavior has grave consequences for them both.

Worse yet, Janie learns the truth about herself and her ability -- and it's bleak. Seriously, brutally bleak. Not only is her fate as a dream catcher sealed, but what's to come is way darker than she'd feared....

Ooh. I really loved this one. It had been a long time since I read it's predecessor, Wake, but that didn't seem to matter. I was once again instantly swept up into Janie and Cabel's story.

Fade by Lisa McMann is the second in her Dream Catchers series where Janie has the ability to enter people's dreams. She is continuing to use this ability in order to help the police to catch criminals that would otherwise go free without her unusal gift. She is working with her partner and secret-boyfriend Cabel, though, they get precious little time to spend together. This case in particular seems to rip them apart and they face almost insurmountable problems.

Lisa McMann tells this story with such a sparse writing style, everything seems really stripped back and it can be a little jarring to get used to. I however love it. As well, I really enjoying learning more about the limitations and depths of dream catching. Up until now, Janie has learnt very little about dream catching and the toll that this ability has on her emotionally, physically and psychologically. But with the journals left to her by another dream catcher, Martha Stubin, she is able to come to terms with some very devastating conclusions.

The bulk of Fade focuses on Janie's attempt at capturing a sexual predator that may or may not be one of the teachers in her high school. It makes for quite a grim subject matter and I felt at times that this book was much heavier in tone and content that Wake. There is so much emotion that leaps off the pages. Janie's despair at her failing body, the reality of facing down a rapist, the difficulties that come with having a relationship with two very complicated people such as Janie and Cabel.

I can see that this book and the series might not be for everyone, but something about the characters, the emotions involved, the writing style - it all really captivated me from the very beginning. I'm hooked! And I really cannot wait for the conclusion to this series, Gone. Let it be soon!
Written by Michelle Fluttering Butterflies at 09:29