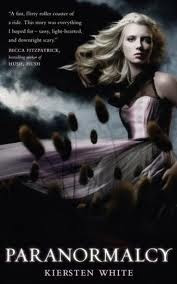 Everyone said that Paranormalcy by Kiersten White was really good and it isn't that I didn't believe the 1,001 other bloggers when they posted their reviews when the book first came out. It was more that I was trying to wait until all the hype died down and I was able to have more normal reading expectations for the book. When I picked up Paranormalcy, I'd been reading a huge number paranormal books that I'd had lined up ready to read for this event, and perhaps I was feeling a little bit worn out from similar plotlines and characters from other series. And then I read Paranormalcy and it felt like original and fresh and very, very fun. Thankfully, I completely agree with all those other readers who raved about this one. If you were one of those people who recommending this book to me? Thank you is all I have to say.

Our main character is pretty different. As much as she'd like to believe herself and her life as being completely normal, she really isn't. Because Evie has a rare and special gift - she's able to see through the glamours of other paranormal creatures, and with this ability she's been living and working her entire life in this facility that monitors and neutralises paranormals like vampires from hurting others but also giving them jobs within the company. Living with this agency, the IPCA, is all Evie has ever known. Her best friend is a mermaid, her ex-boyfriend is a fairy who continues to try to get back into her life and Evie's pretty handy with a taser (that is pink and covered in rhinestones) but what Evie really craves is a family, a normal life and a place to really belong.

There really is so much to love about this book. I love Evie as a character. She's a fab character, really sassy and funny. She can take care of herself and is pretty independent and feisty. Her ability to see through things has left her a bit isolated, as she has no real family and at times feels more like an employee of the IPCA. Luckily, she has her best friend, Lisha (mermaid), there who she's able to gossip with and together they watch all the latest episodes of the teenage soap opera that Evie is obsessed over. Lisha is great as well. Her robotic voice which isn't able to translate swear words constantly made me laugh.

But when paranormals start dying and very strange things begin happening at IPCA, like the break-in of a mysterious shapeshifter, Evie realises that somehow she is connected to a prophecy that could mean the death of all paranormal creatures and the destruction of the IPCA.

As well as really loving the characters in Paranormalcy, I really thought the mystery of the prophecy and the strange goings on were very interesting and kept the plot moving forward at a pretty quick rate. I think the development of Evie was great to witness, as she processes a lot of information that has been kept from her as well as seeing the paranormal creatures in a new perspective. I really absolutely ADORE her new love interest. I love how innocent and awkward and unsure of herself she is around Lend as their relationship grows, but I also love Evie's hunt for normality ... and lockers. Bleeping wonderful, this one. Highly recommended.
Written by Michelle Fluttering Butterflies at 09:32