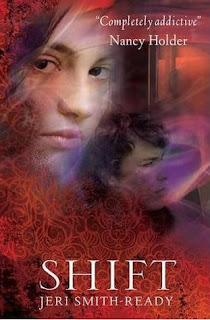 Shift by Jeri Smith-Ready follows on a few months after the shocking events that took place in Shade. Aura had expected that Logan would finish his final concert and pass on... and instead, he turned Shade. Since then, Aura has put her life mostly on hold while she waits for news of Logan, waits for him to come back.

I thought Shade was an incredible book, taking the paranormal genre and twisting it into something new and fresh. It had a brilliant cast of characters and this wonderful mix of tension-filled romance as well as an exciting mysteryto unravel. Shade is the book that most took me by surprise last year. And Shade is completely on that same level, only without the surprise. Instead I had higher expectations this time, and Jeri Smith-Ready really delivered. Shift is very addictive reading and once I started, I didn't want to put the book down until I'd finished, desperate to know how things would play out. A huge thank you to Luisa from Chicklish for sending me this book!

I'm still really impressed with the mythology of the ghosts in these books, and Shift really builds on what we've already seen. The ghosts and especially Zachary and Aura, these two special people who are born so close to the Shift that changed the world, are given some incredible new abilities and different limitations throughout the course of the book. It really changes what this world knows about ghosts and shades and these new changes play a huge part in changing the relationships between all three of the main characters, Aura, Logan and Zachary.

And it definitely is a huge drawing point for me, these three characters and the way in which they interact with each other. Usually when I'm reading a book with a love triangle such as this one, there is a clear winner that I'm rooting for wholeheartedly, but for the most part, I was fairly evenly divided between both Logan and Zachary during Shade, though one did pull ahead quite a bit during Shift. I just love how clear it is how much Aura loves Logan, how much their relationship when he was alive meant to her and how willing she is to hold onto what she had. Even though there is the absolutely swoony Scottish Zachary there who cares for Aura and really wants more from her. I loved how Aura's relationships with both boys changed during Shift even though Zachary doesn't wait around for Aura to make up her mind. And while at times, she isn't quite fair on either boy, she really needs more times to sort out her own feelings and to work out what she needs and what will be best for her.

Which brings us to the mystery aspect of the story. There is still so much for Aura to learn about how and why the Shift occurred, more about her mother's personal history, the identity of her father, the different things Aura has learned about her capabilities with ghosts and especially why so many government officials so interested in her. A lot of this explored during Shift, but it's like we're given so many different jigsaw puzzle pieces but not quite told how they all fit together. Some questions are answered, and it's an exciting journey to take with some very surprising and almost shocking revelations. This book is absolutely brilliant and I cannot wait for the next book in the series, Shine. Bring it on!
Written by Michelle Fluttering Butterflies at 08:33