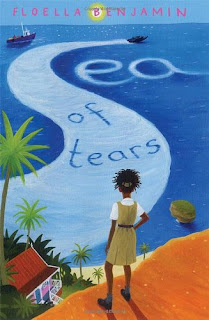 Guest review from Kulsuma of sunshine and stardust

Sea of Tears by Floella Benjamin was a thought-provoking, coming of age story. The story starts as Jasmine is saying goodbye to her South London home and then journeys back to when Jasmine’s parents tell her that they will be leaving England for Barbados due to the dangers of London.

At first, I was a slightly surprised that Jasmine was so against moving to Barbados as it is Barbados after all! I felt slightly put off by her defiance. But then I thought about my own experiences and it became complex. Having lived in London my whole life, going on a ten week holiday to Bangladesh two years ago brought the question of my identity to the forefront. Like Jasmine, I asked myself several questions, ‘Who am I?’ and ‘Where do I belong?’

Jasmine has to leave her friends and everything she knows behind and go to a place she has only experienced second-hand through her father. Jasmine, of course, has to grudgingly go along with it, but even though her home in Barbados is beautiful and she makes a new friend called Devlin, Jasmine cannot forget the life she left back in London. More to the point, she tries everything she possibly can to get that life back, both by herself and with Devlin’s help.

I really enjoyed Sea of Tears as it dealt with a major issue that is important to teens; the question of identity. Jasmine’s journey is a turbulent one; at different points of Sea of Tears she is bullied, lost and isolated, sometimes all three at once. However, in the end, all her questions about who she is, who her friends are and where her home is are answered.

It was great to see London portrayed authentically in Sea of Tears; however, I wished more of its positive aspects were depicted. There was a high concentration of negative events such as bringing knives to school, shoplifting, internet grooming and being kidnapped in such a short space that it left me questioning why Jasmine would want to stay in London at all.

Sea of Tears also had a lot of ‘telling’ and not ‘showing’ at the beginning which stymied the flow of the book and makes the book suitable for younger readers. Once the main action of the story started however, it was very interesting and exciting to read about. Furthermore, the climax could have been protracted as it felt slightly rushed. However, the ending was satisfying and was what I expected it to be.

I liked the characters that Benjamin created and believe that teens will be able to relate to them. Jasmine matures as a character throughout the book. I really liked Devlin and Jasmine’s grandmother as they were easy-going and helped Jasmine to become the girl she eventually becomes.

Overall, I liked Sea of Tears and would recommend it to those interested in identity, friendship and family.


I'm intrigued by the issues of identity. Thank you so much for this review Kulsuma!
Written by Michelle Fluttering Butterflies at 08:46