REVIEW: I'd Tell You I Love You, But Then I'd Have To Kill You by Ally Carter 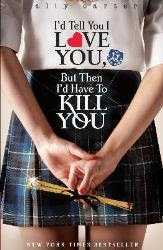 I wasn’t expecting to overly like I’d Tell You I Love You, But Then I’d Have Kill You by Ally Carter. I mean, just look at that title. It was going to be silly and cheesy and I probably wouldn’t like the characters all that much, but maybe it’d be a cute enough way to pass the time. Oh I do like being wrong about books.

I’d Tell You I Love You is set in the world of the Gallagher Academy. On the outside it’s a private school for over privileged girls, on the inside you have to be careful what you touch, lest poison gas suddenly erupts from a statue. See, the Gallagher Academy is a school for spies. Cammie ‘The Chameleon’ Morgan is in her third year and about to take Covert Operations. Cammie’s mother is the headmistress of the school, also a spy, and they came here after Cammie’s father died during a mission. Cammie is known as The Chameleon due to her uncanny ability to disappear in plain sight.

On her first mission for covert ops, Cammie meets Josh, an ordinary boy from the town near to where the Academy is based. Of course, Josh can never know who Cammie really is, but she likes him and, more importantly, he seems to like her. Cammie’s friends Liz and Bex decide to do a background check on Josh, to see if he’s not actually been sent to infiltrate the Academy though Cammie. And hijinks ensue. Hijinks including Liz and Bex abseiling down the side of Josh’s house while he’s right there under their noses, and intricate plots to help Cammie go on dates.

This book is incredibly good fun, it had me chuckling quite a lot over what Cammie and her friends got up to, and I loved all the characters. Cammie narrates as if she’s writing a report on a mission, and there are fun notes dropped in like ’18.30 hours: The operative realised it’s almost impossible to look pretty and/or seductive if you SERIOUSLY have to go pee.’ Cammie is funny but also smart, and loyal to her friends. She’s also hurting after the loss of her father and starting to realise the effect this has had on her and her mother. And also how dangerous spying can be. Is a life in the field really what she wants? Josh is a part of her escape from that life, if only for a little while.

Even though it’s a book about teenage spies, the things that happen to the girls are relatable. I also like that a new girl appears on the scene, but that storyline doesn’t go where you necessarily thought it would. For a book about girls living in close quarters, there are very few ‘bitchy’ moments, and mostly they’ve got each other’s backs. As you would expect from spies I suppose. Still, it’s always nice to see books that don’t go the easy or obvious routes. I’d definitely recommend this one, and will happily continue with the series.

Thank you for that Carrie!
Written by Michelle Fluttering Butterflies at 09:06