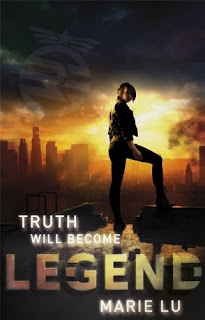 I was really looking forward to Legend by Marie Lu. I had been hearing some good things about it and I sat down to read with high expectations of addictive book filled with action and romance. And while there is plenty of action and some romance and I did really enjoy it, I wasn't quite as blown away by this book as I was led to believe.

I really love the setting. I've been saying that a lot lately, but it's true. A futuristic story set in a war-torn Los Angeles sounds pretty cool to me. In this future world, the United States is torn apart by a Civil War - the Republic against the Colonies. I'm hoping that this war between the two is explored a bit more in future books!

And within Legend, we have a dual-perspective from our two main characters, June and Day. This was done really well and we are able to see a clearer view of what it is like to live in the Republic both from within the elite of the military as well as from the viewpoint of a criminal living on the street.

June is this super smart girl who has fast-tracked her way up through the Republic's military after gaining a perfect score on an intelligence Test given to all people of the Republic. When her older brother is killed during a mission, June makes it her goal to avenge her brother's death and to kill the Republic's Most Wanted criminal, Day. I really liked June. I liked that she's really intelligent and strong-willed. Her relationship with her brother seemed pretty great too. She has put all her truth and faith into the Republic and it was a little sad to see everything crumble around her.

Day on the other hand, failed his Test but managed to escape and has been creating havoc against the Republic ever since using his street-smarts and great agility in an attempt to create better living conditions for the poor. When people Day cares about become sick with plague, Day goes to great extremes in order to help, even if it means risking exposure and being caught by the Republic. I love the way in which Day has been turned into an exaggeration of himself, with people on the streets embellishing his actions and making him Legend. The reality of who Day is was a lot more interesting to me. Somebody who loved his family and his brothers, somebody who looks out for those who cannot help themselves.

I really enjoyed this dystopian world and these characters, discovering the hidden secrets of both June and Day and also that the government has been hiding. There's plenty of action here, with explosions and building-jumping but there's also some sweet relationships going on and an interesting questions to be answered. I look forward to the sequel. 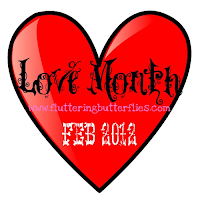